MTR Rava Idli in pressure cooker is the recipe something i have always found useful as a working mom. Because its a big time saver recipe for the breakfast as its super simple and quick.

In my current blog, I would like to share my experience of cooking the super quick recipe of MTR Rava Idli in pressure cooker. I am sure you will also get benefited like me in saving time for your breakfast.

Idli is one of the most popular breakfasts in Indian households. Especially in many south indian kitchens serves idli as the dinner as well. Rava idlis are one of the few foods which can be served as breakfast, lunch, evening snack and dinner 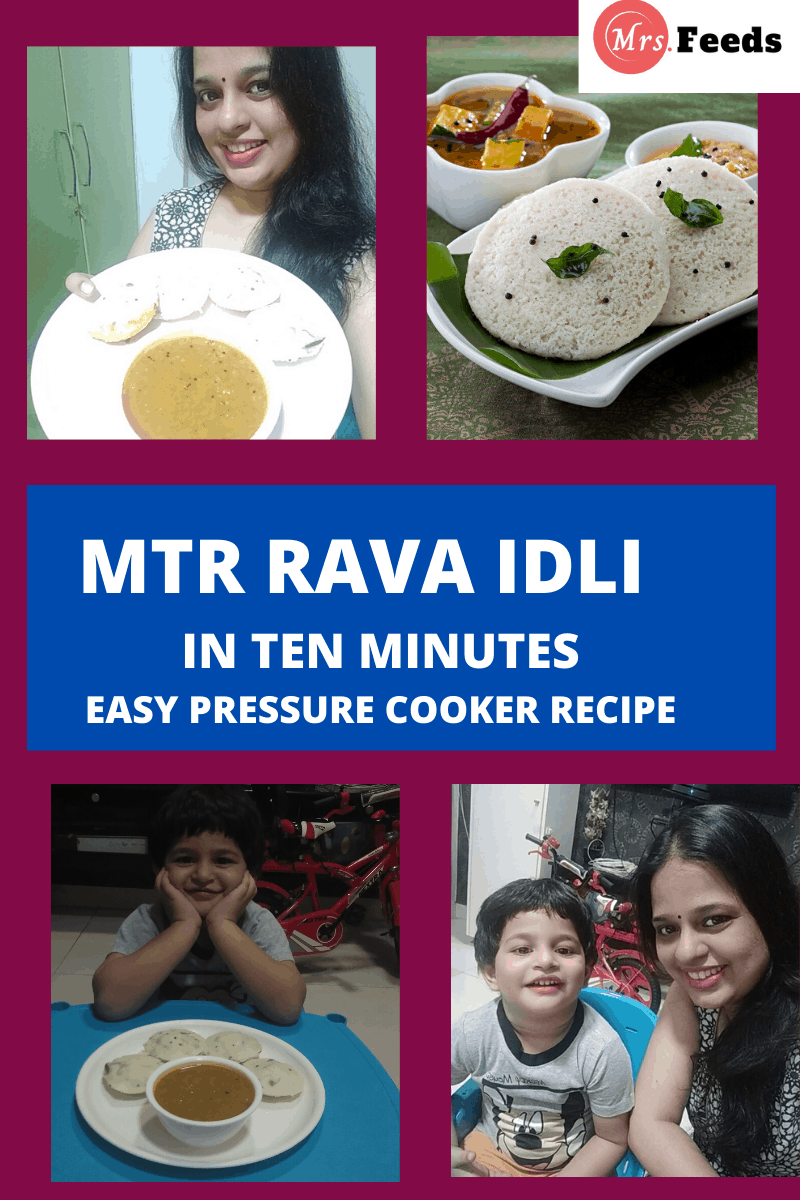 How to make MTR Rava Idli in pressure cooker?

This is the question in many of our minds. The solution is right here in this recipe. You will be amazed to see the Rava idlis getting ready in no time. These steamed rava cakes are super soft and spongy. You will enjoy making this for your family.

Before we get into the actual recipe, it is  very important to know utensils and ingredients used. This has really helped me have my cooking very efficient and faster.

The pressure cooker method of making rava idlis is the most traditional way followed in many South Indian households. This is the quickest process to make the instant idlis without fermentation. Please follow the simple step by step procedure of the easy MTR Rava Idli recipe.

Take a big bowl and transfer one cup of the MTR  Rava Idli mix into the big bowl. 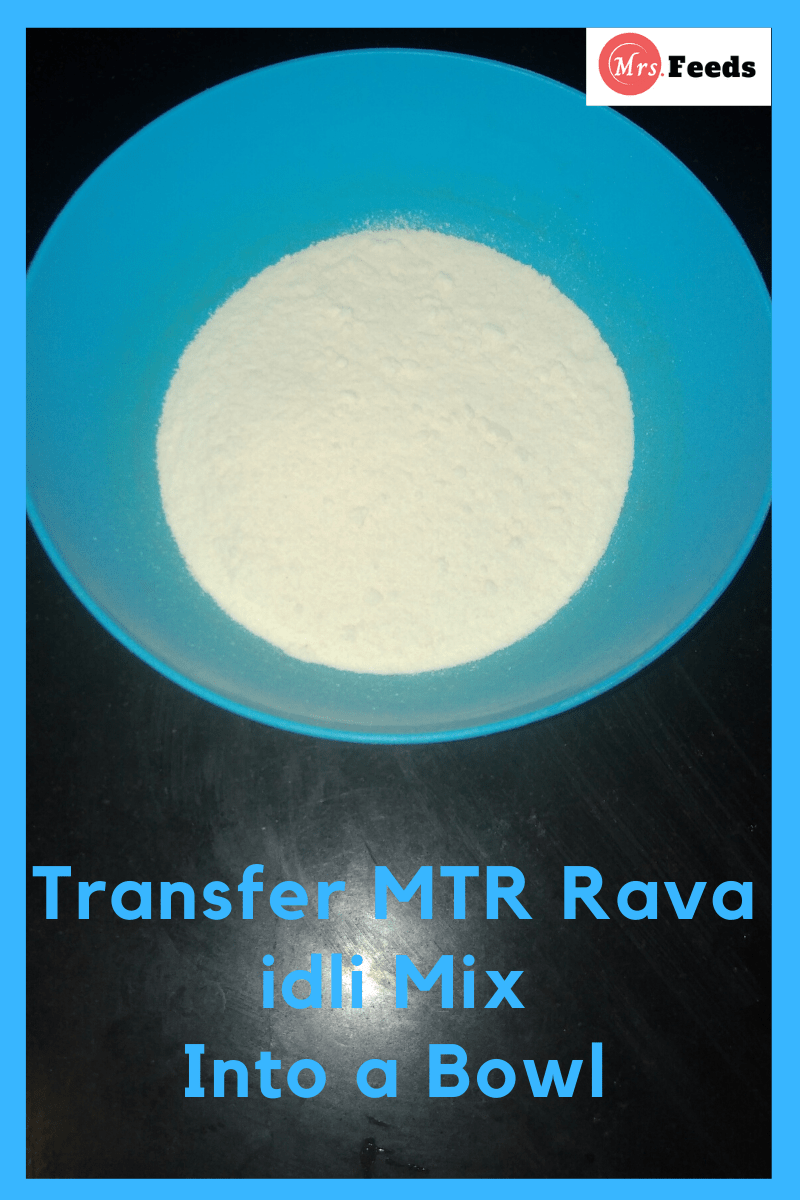 Into the bowl of MTR Rava Idli mix, add half a cup of curd. Mix them together using a spoon.

Once it is mixed properly, add about one cup of water to the bowl and make it into a thick paste. Make sure that your batter is completely lump-free.

Set this aside and prepare tempering or tadka for the batter.

Add a little water to the existing batter

Add a little water to the existing MTR Rava idli batter. You don’t have to mush it up. Just a little quantity will do. Once water is added, whisk it a little with a spoon or a whisker. 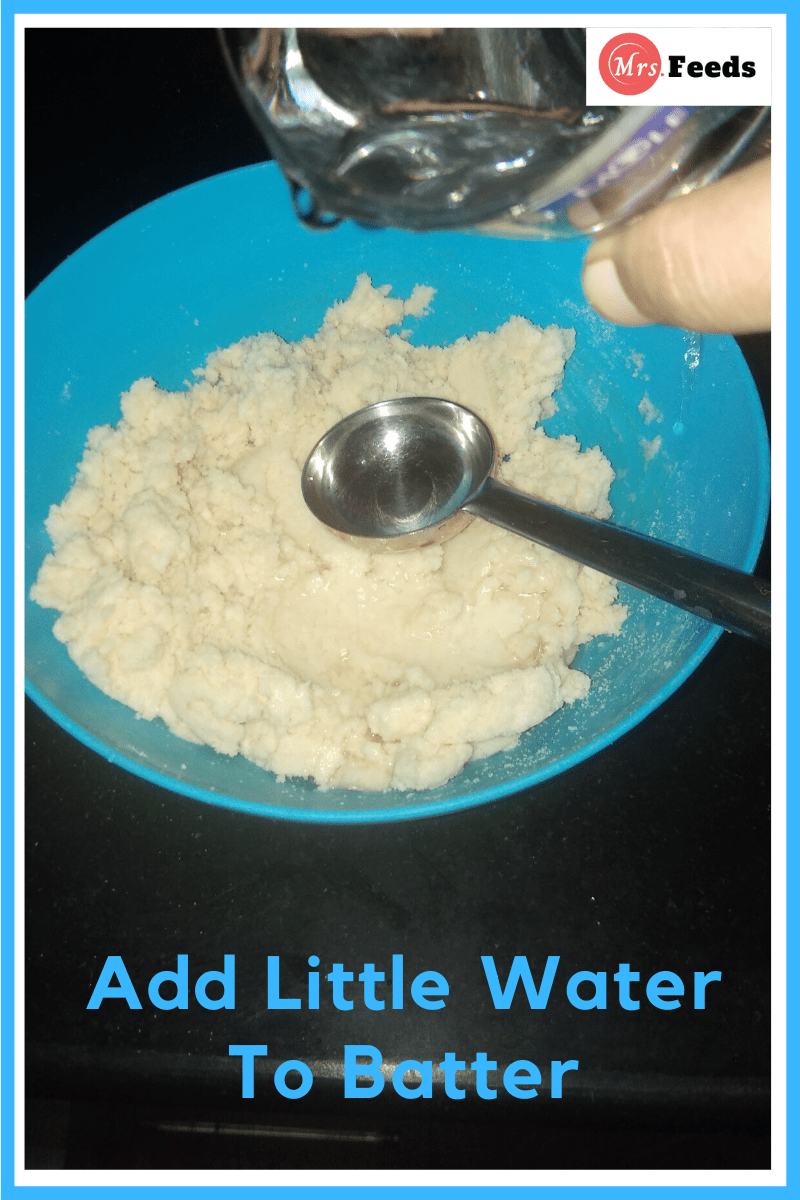 Heat Some Oil in a Pan for tempering or Tadka

In a small pan heat about one tablespoon of oil. Keep the flame on medium.

I used Light Oilve Oil. However, Coconut oil and groundnut oil are also some good options. In case you have none of these, use some refined oil or ghee (clarified butter). 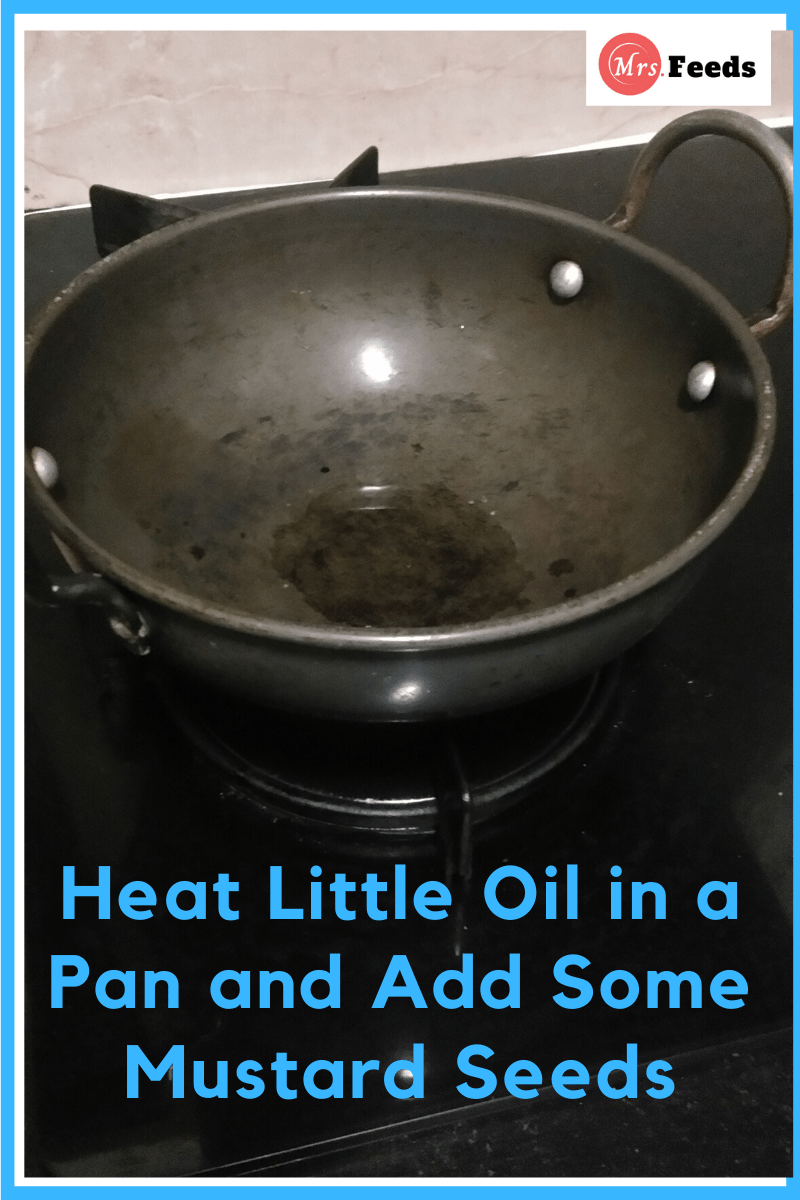 Add rest of tempering ingredients to the pan

Once the seeds have crackled, quickly add 5-6 curry leaves and a pinch of asafoetida into the oil. Remember, the flame is still on medium heat.

Increasing the flame can cause the tempering or tadka to burn.

After the above step, add half a cup of green peas into the pan. Also, pinch of salt.

Cook the mixture in the pan for about 2  minutes while constantly stirring it.

Switch off the flame and let the mixture cool down for a minute or two. 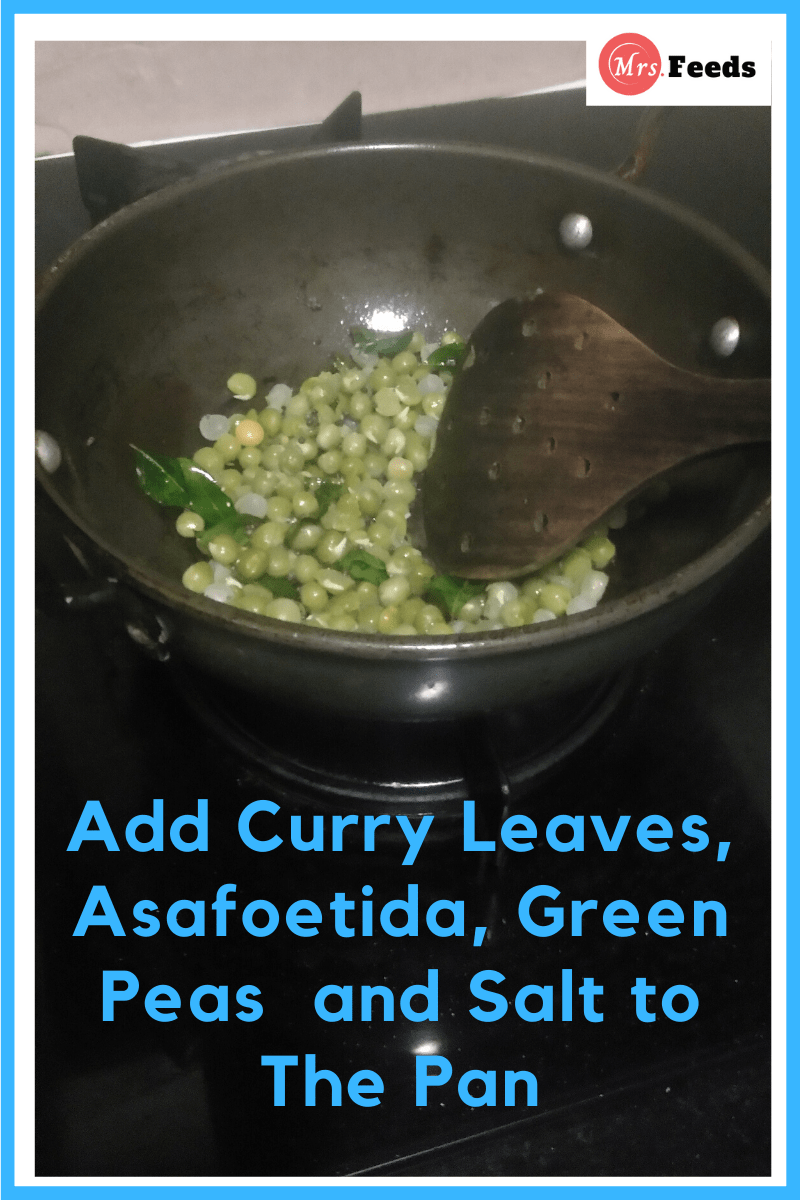 Add the tempering you have prepared in the steps above to the batter you had kept in the bowl. Mix the ingredients properly using a spoon. 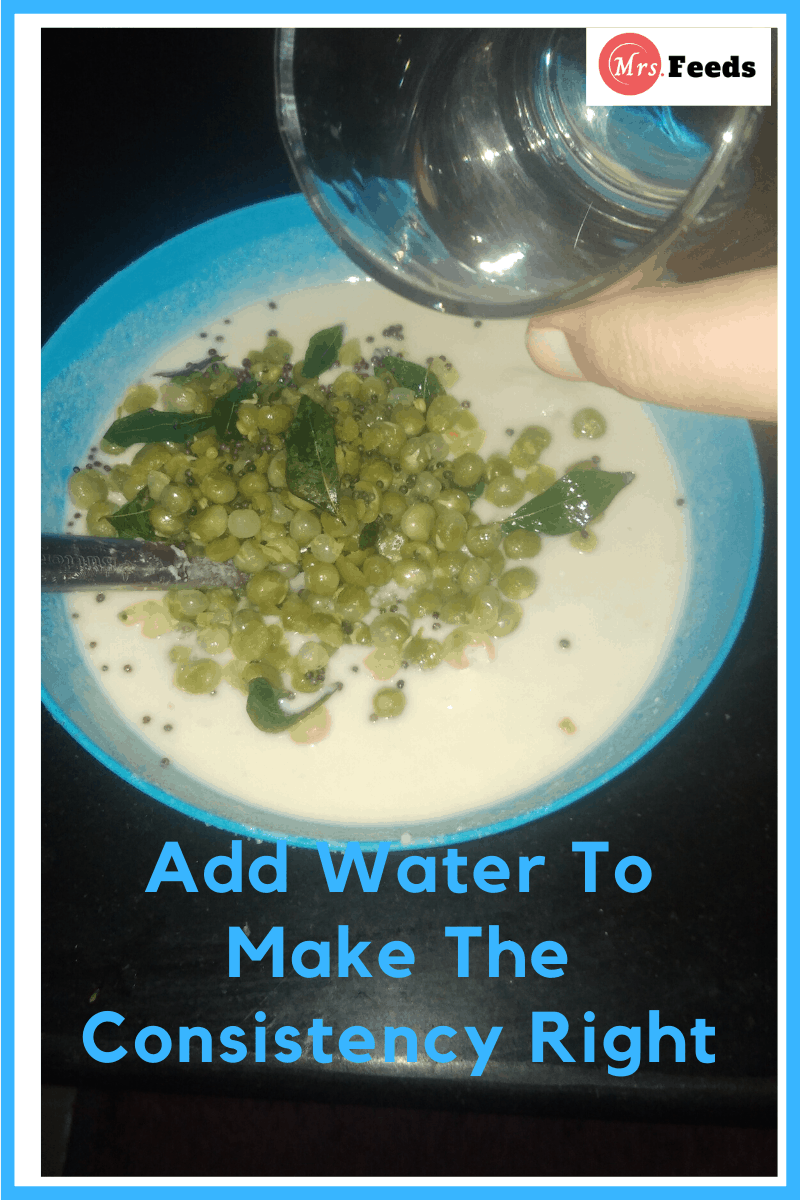 Add water to the batter to adjust consistency

If the batter is too thick, add water to make the consistency right. The batter should neither be too thick nor too thin.

Start by adding 1-2 tablespoons at a time.

After mixing all the ingredients, cover the bowl with a lid. Let the batter rest for 15-20 minutes.

The MTR Rava Idli mix tends to absorb water and therefore, resting is very important. It also helps the batter to ferment naturally.

After the batter is rested, check its consistency. The idli mix tends to absorb a lot of water and the batter tends to become thicker.

Add salt to taste and 1-2 tablespoons of water at a time to get to the right consistency. The consistency of the batter should be similar to a cake batter. It should neither be too flowy nor too chunky. 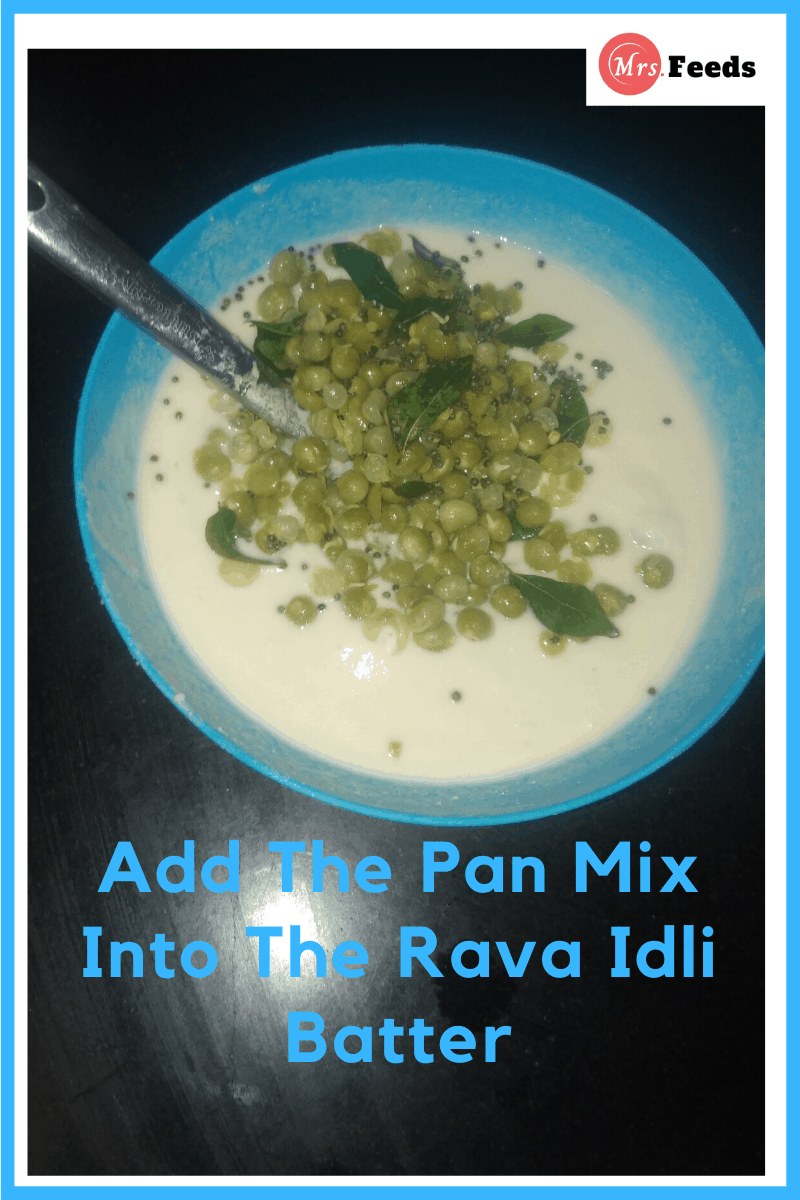 While the batter is ready, prepare your idli moulds to stand. You can use the metal idli stands

Take some oil in your fingers and grease the insides of the idli moulds. The oil will prevent the batter from sticking to the mould. 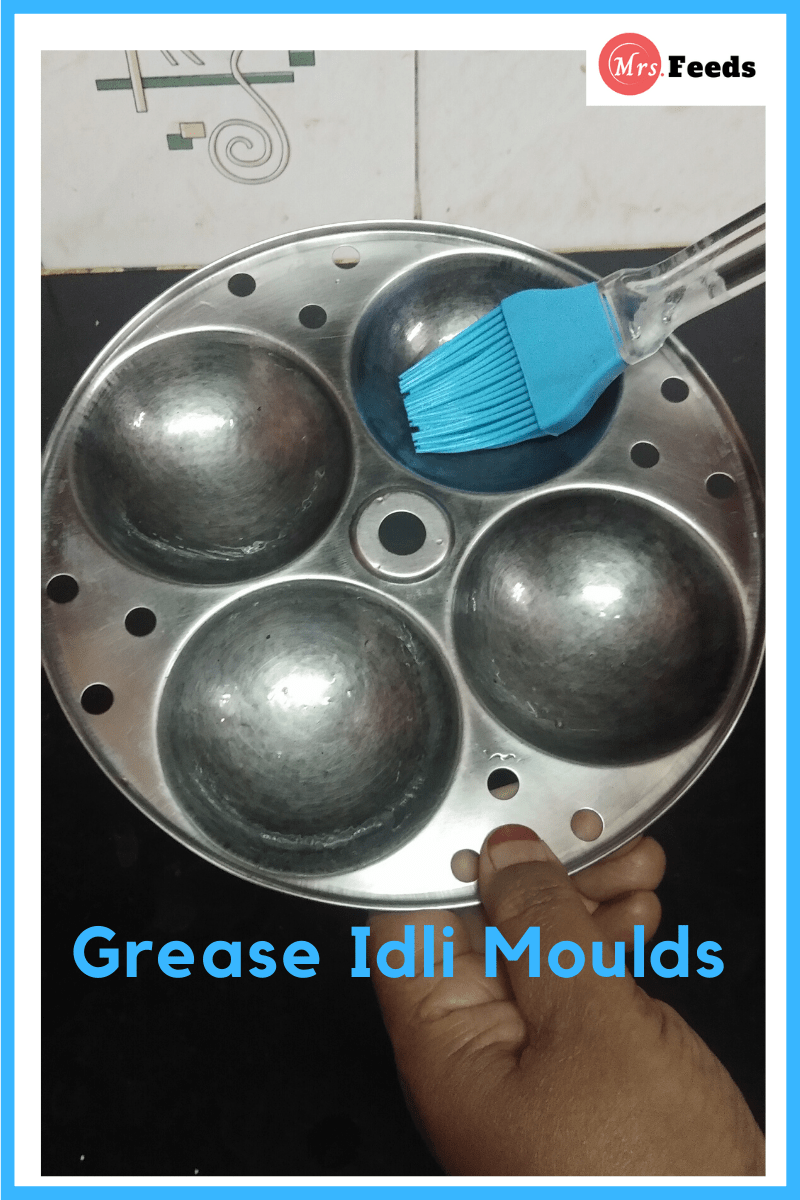 Pour the batter into the moulds

Take the batter and pour them into the idli moulds. While filling the moulds, make sure you keep a little space for the idlis to rise. 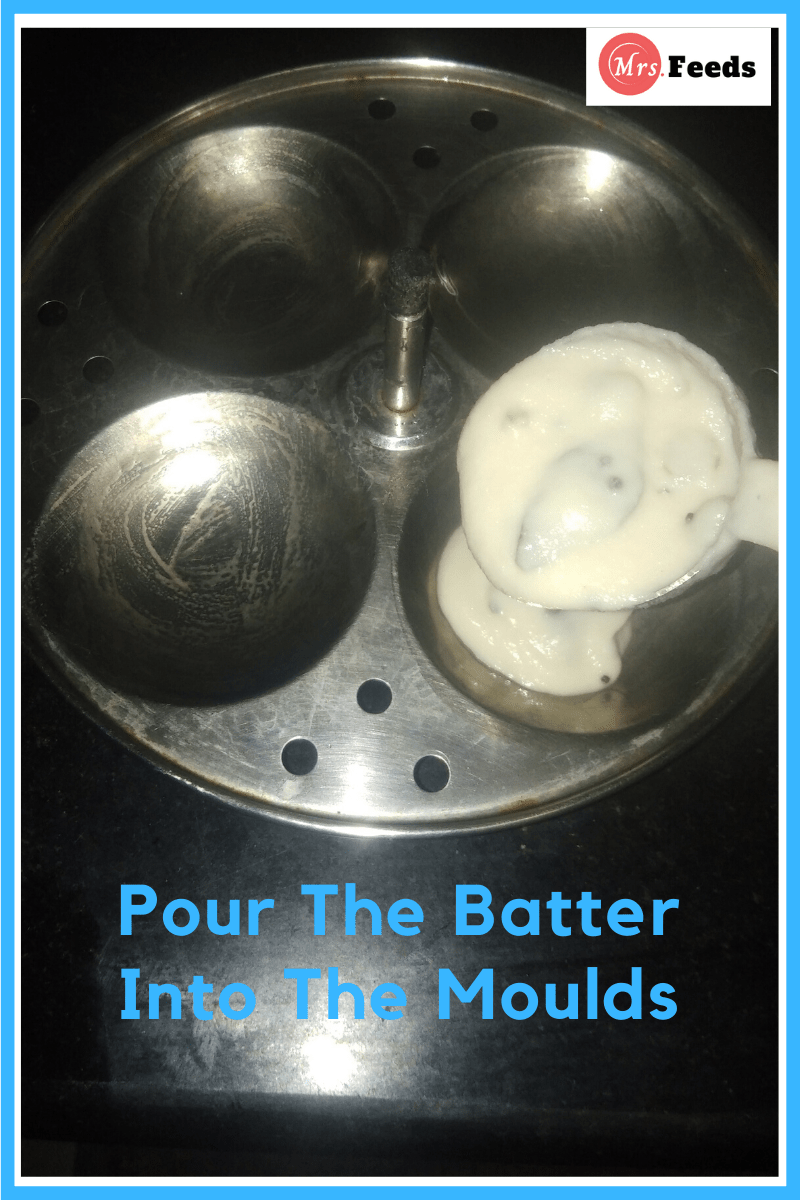 Fill the cooker or container with some water. The water in the pan/ container/ cooker is to be filled in a way that the water does not touch the moulds directly. 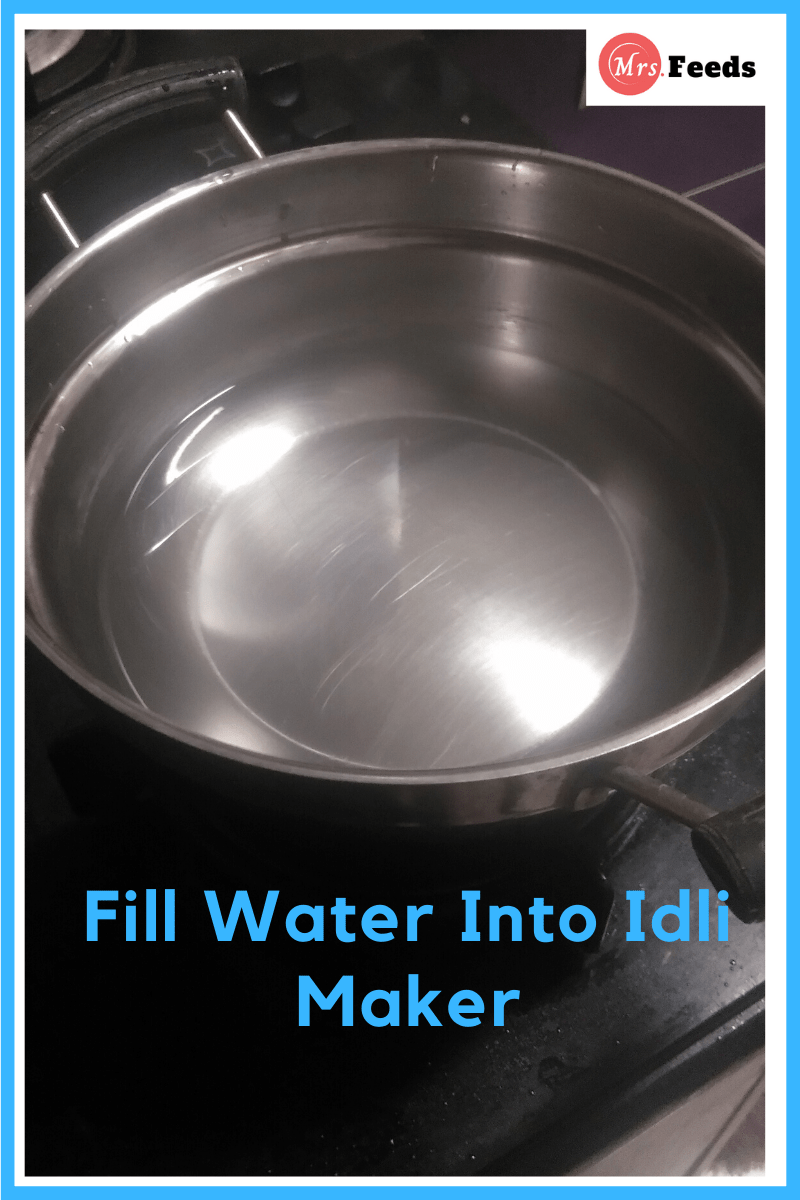 Place the idli stands in the cooker or container or pan

Carefully place the batter filled idli stands into the cooker/ container. If you are cooking it on the flame, you can use either use a cooker or a big pan to place the idli stands. 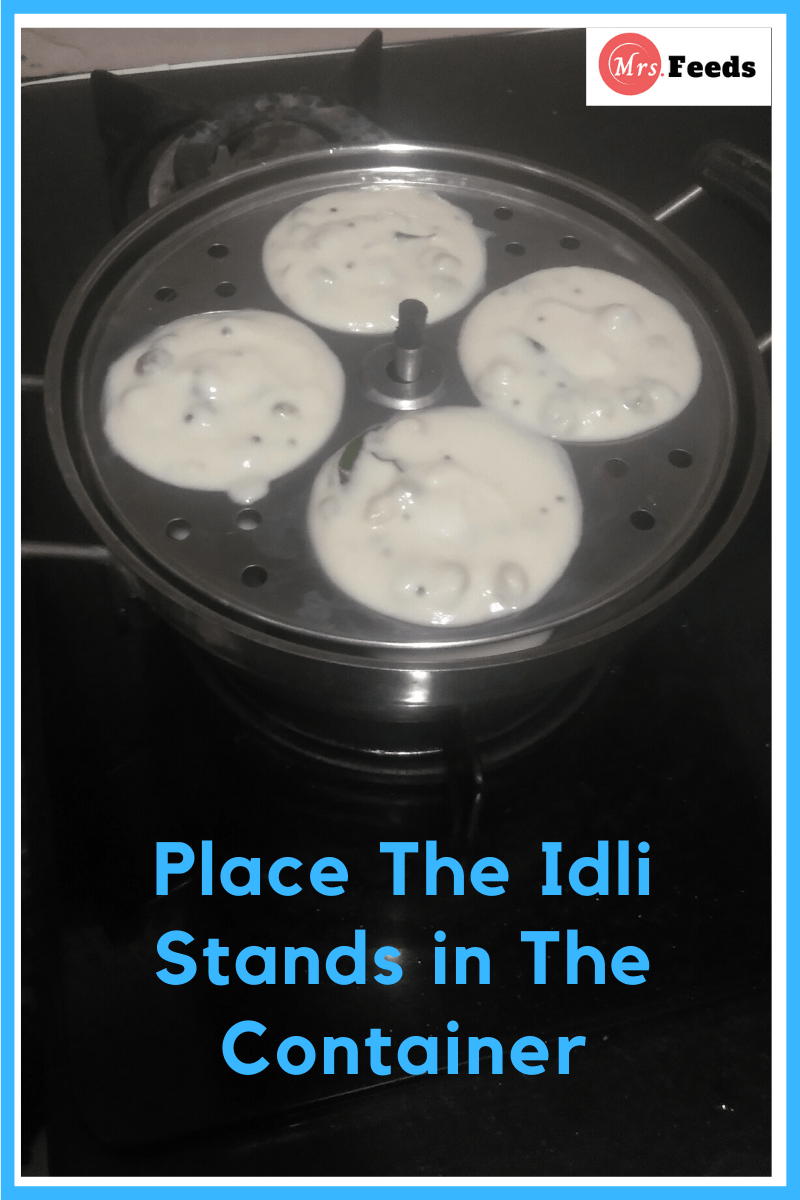 Turn on the stove with the Idli Cooker

Cover the container containing the filled idli stand with a lid. Covering the container is important as it helps prevent the steam from

escaping. Cook one batch for 10 minutes 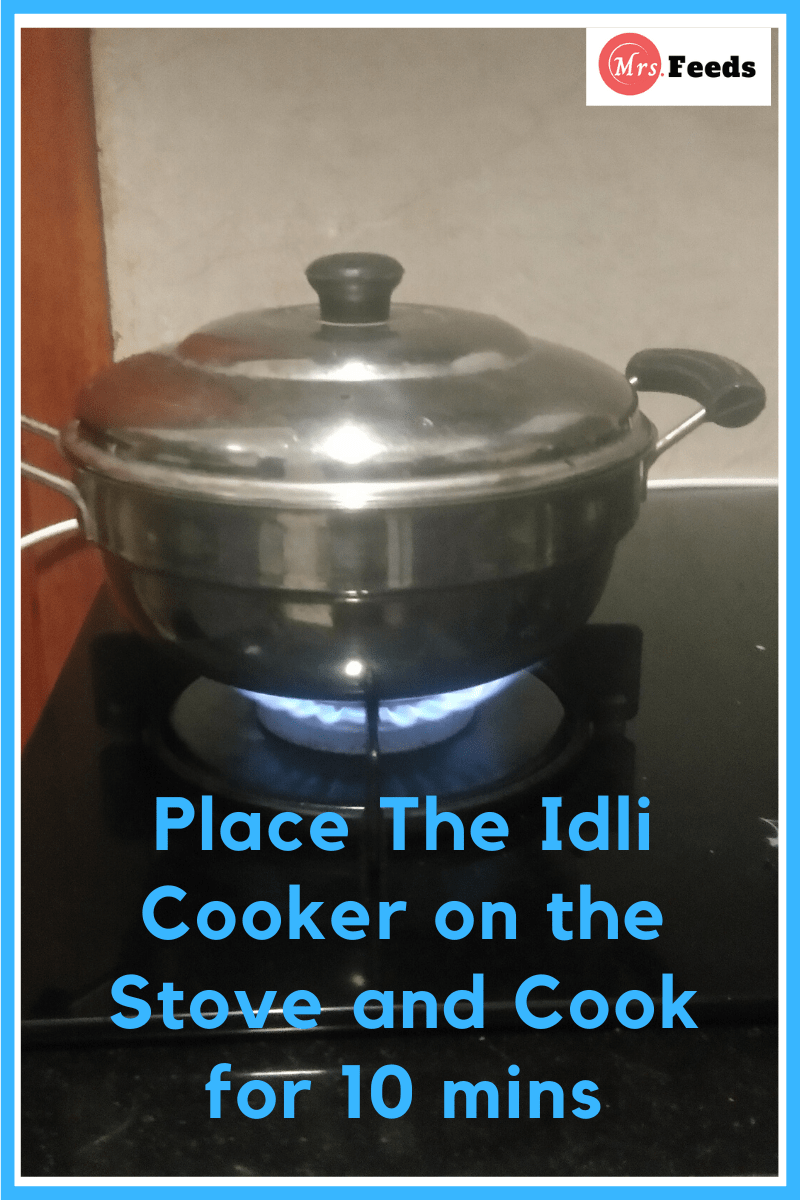 Remove the container from Cooker

Once the time is up, remove the idli maker from the Cooker. Switch off the gas.  Let the container cool for a minute or two before opening the lid. 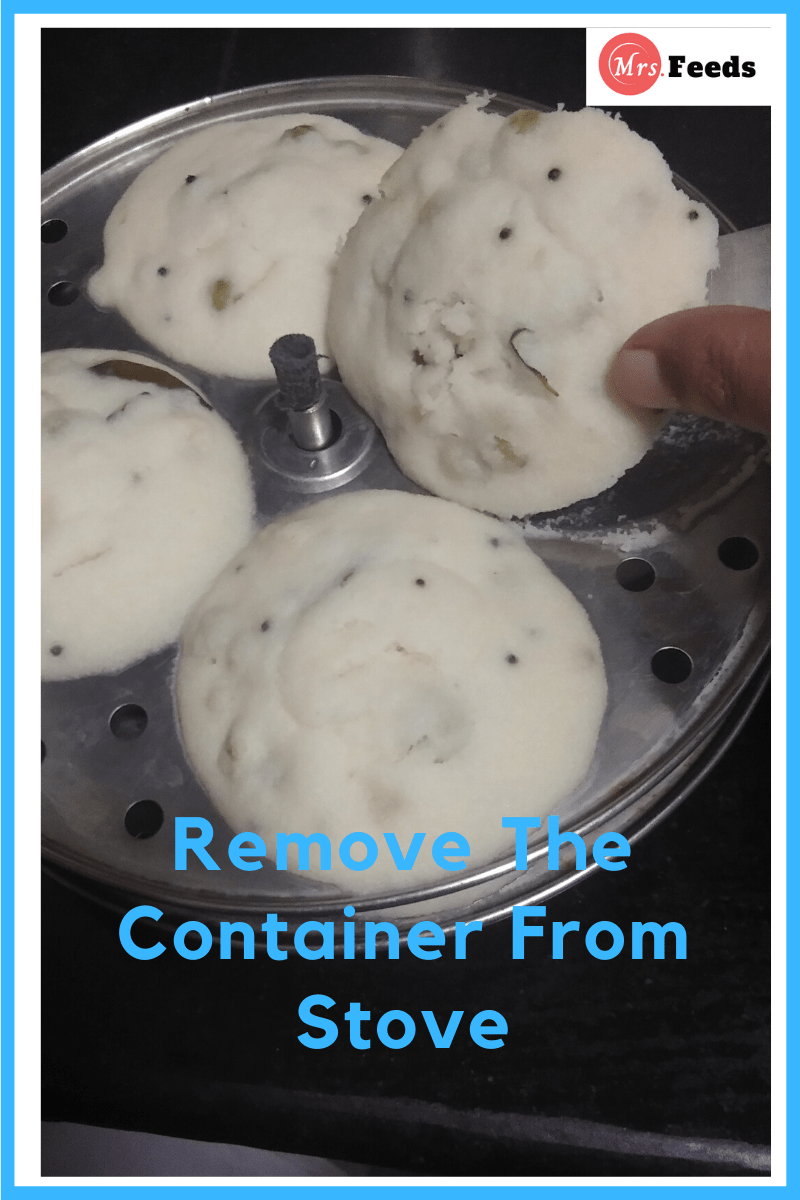 Remove the idlis into a bowl

To Remove the idli stand from the container , You must scoop the idlis carefully using a knife. let the idlis cool down a little.

Now, carefully using your fingers, slide the idlis out of the moulds and transfer them into a bowl. 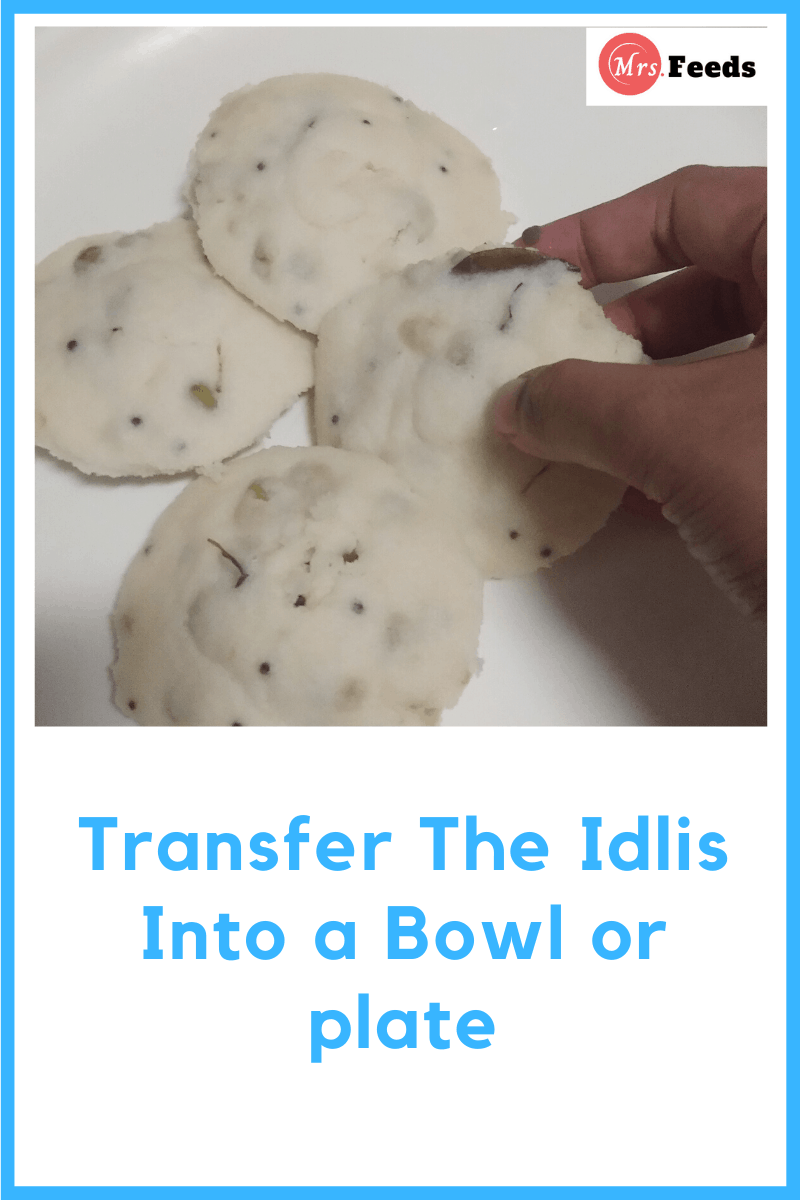 Plate and Serve the Idlis with hot Sambar

Remove the idlis onto a plate and serve these delicious idlis with hot sambar or chutney or both.  MTR Sambhar has always been the best accompaniment for the MTR Rava idli . You can add is as a snack or for breakfast. 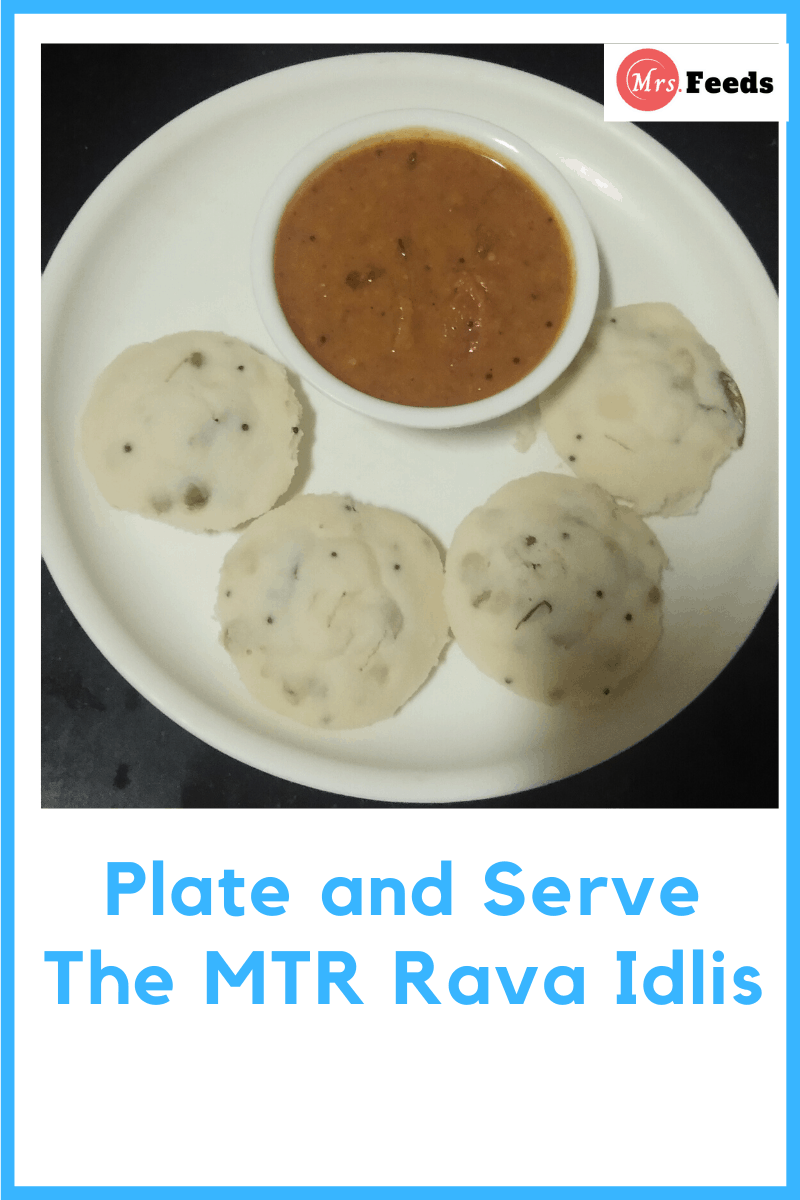 You must always remember the important tips for any cooking.I would like to share the necessary tips which follow to make perfect soft and spongy MTR rava idllis.

2. Remove all lumps from batter

If your batter has turned out to be lumpy, make sure you remove all the lumps using a whisk. If you do not have a whisk, use a spoon or fork to remove the lumps.

3. Do not overfill the idli moulds

4. Be watchful of the time

When using a cooker for making idlis, be very mindful of the time. Do not overcook the idlis or they will get hard.

6. Do not overfill the idli moulds

Instead of plain Rava idlis, You make sure to temper and add veggies to enhance the taste of idlis

Always prepare the tempering for the idli on a medium flame. If you keep it at a high flame, the tempering will burn and give your idlis a bitter taste.

10. Green peas to be cooked well

Make sure the green peas are cooked well along with the tadka. This way you can ensure they are mixed well before mixing into the batter.

11. Adding amount of curd to the MTR Rava Idli mix

You should make sure to add 1/2 the measure of curd to the MTR Rava Idli mix. As its an important ingredient in making the batter rise. This will help us give us soft and spongy idlis.

12. Scooping the idlis easily off the idli mould

You must scoop the idlis carefully using a knife. Wet the knife if the idli is sticking to the knife.

13. Idlis can be refrigerated

If there are excess idlis made, You can always refrigerate them and reuse them whenever needed.

If you had mixed excess batter, you can always store the batter in the refrigerator and use it the next day. So it doesn’t have to be used all in one day

Hope you had wonderful experience of learning the quickest recipe of idli. You will be amazed to know that you can also enhance the taste by making podi idli recipe. Please leave your comments and questions in the below section. I will be happy to answer them.