Rice idli Versus Rava idli is a very delightful food comparison. Despite the similarities, it is interesting to note the differences in various aspects.

Rava idli and Rice idlis are part of every day breakfast, lunch and evening snacks in most of the Indian households.  It is very important to understand what makes each the best.

In my current blog, I would like to present various dimensions of comparison between them. It would help you which one to choose and what the kind of recipes you would want to make according to your choice.

Rice Idli Versus  Rava Idli – which is better ?

Being born and raised in Chennai- Tamil Nadu, Idli has become very important part of our lives. I have always tried various recipes with idli. This has helped me study the differences and similarities between the rava and rice idli.

I am happy to share my knowledge with you so that you can also get benefited out of it. Let us now get started with the comparison between Rava idli and Rice Idli from different dimensions.

A POINT WISE COMPARISON BETWEEN RICE IDLI AND RAVA IDLI

It would be really unfair to say which is good than the other. Because rava idli and rava idli have got its own pros and cons. It depends on individual choice and taste. You may pick your choice after understanding the different aspects of comparison being done below

Rice idli is used predominantly in Tamil Nadu. So much take care is taken in preparing the rice batter also. Rice idlis are the mostly commonly used breakfast in all the Tamil Nadu households.  Rava idli is the specialty of the state of Karnataka which is also the commonly served breakfast.

Rice is the main ingredient while making the rice idli. There is idly rice available in the market which used instead of the regular rice. This is best suited for making soft n spongy idlis. Sooji or Rava or Semolina is the main ingredient of the rava idli. Rava idli is a slight variation to the traditional idli by substituting rice with rava.

In the urban households , microwave cooking has become very common. It takes much lesser time than the traditional cooking. Timer can also be set so that we dont want to watch while its been cooked. Rava idli and rice idli takes the same time of five minutes to cook in microwave. Please make sure you use microwavable utensils while cooking.

Idli is known to be one of the easiest breakfast anyone can make. if the batter is ready it takes no time to cook the idlis. Both rava idli and rice idli are easy to cook both in the cooker as well as the microwave. While the time taken in each method is different as mentioned above.

Idlis are the best Kids friendly breakfast.  It can be cut into stripes and different shapes and presented to kids. It is easily digestible and gives required nutrition also.  Its the most preferred food for kids lunch boxes and evening snacks. Both rava idli and rice idlis are equally preferred by the kids.

Taste of Rice idli is plain while the rava idli taste can be mild salty. So adding the salt in the recipe need to adjust accordingly. Rava idli recipes will need slightly less salt than the rice idli.

Rice batter is fermented overnight which gives the puffiness to the rice idli. Best fermented idli has the most puffiness. While rava idli is instantly mixed with curd and rest for few mins. So Rava idli is comparatively less fluffy

Podi Masala recipe is one of the favorite recipes of all idli recipes. It tastes super yummy when the idlis are tossed in the readymade podi masala powder.

Podi  idli recipe can be easily achievable by Rava idli and Rice idli. This recipe can be done both by cooker method and also microwave method

If you want to bring an innovation to the idli recipe, you should try out the stuffing in the idlis. You can make some vegetable stuffing and place in the idli moulds along with the batter. Yummy stuffed idlis can be made easily by rava idli and rice idli. I am sure this will be one of the most favorite snacks for the kids

Another interesting fact apart from batter refrigeration is cooked idlis can also be refrigerated. How interesting isn’t it ? . If you have some leftovers or you can make it in advance and store it in refrigerator. You can reheat them in microwave and consume it. Both the rava idli and the rice idli can be refrigerated and consumed after reheating.

Since rice idli is made of rice, it has more carbohydrates and calories. Hence not a diabetic friendly diet. While rava idli has less calories , less fat and rich in fiber. It also digests at slower rate and controls the fluctuations in glucose level. Hence rava idli is more diabetic friendly.

Calories of the rice idli is little more than the rava idli because of the rice. Hence rava idlis are preferred for the diabetic patients over rice idlis

Rice idli is preferred for babies of 7 months or older over rava idli. Reason being rava idli contains eno salt or baking soda which may disturb babies  tummy. Rice idli gets digested easily which is good for the babies

Rava idli tastes more time to digest the food while rice idli is easily digested. Rava idli also keeps you full for a longer time. This is great way for the people who are trying to lose weight as its suppresses hunger for longer time. Hence rava idli works best for the weight loss

To make the rice idli batter, the ingredients are soaked overnight. It is then grinded to a smooth paste and then fermented overnight. when the rice batter swells up its ready to use. While rava idli is made by mixing all ingredients together and no grinding fermentation process is needed.

Rice idli batter needs to be fermented overnight for the batter to swell up. Rava idli batter needs resting time of twenty minutes. So if you want to make instant idlis, rava idli can be prepared. If the rice batter is ready, then rice idlis also will not take time to cook. 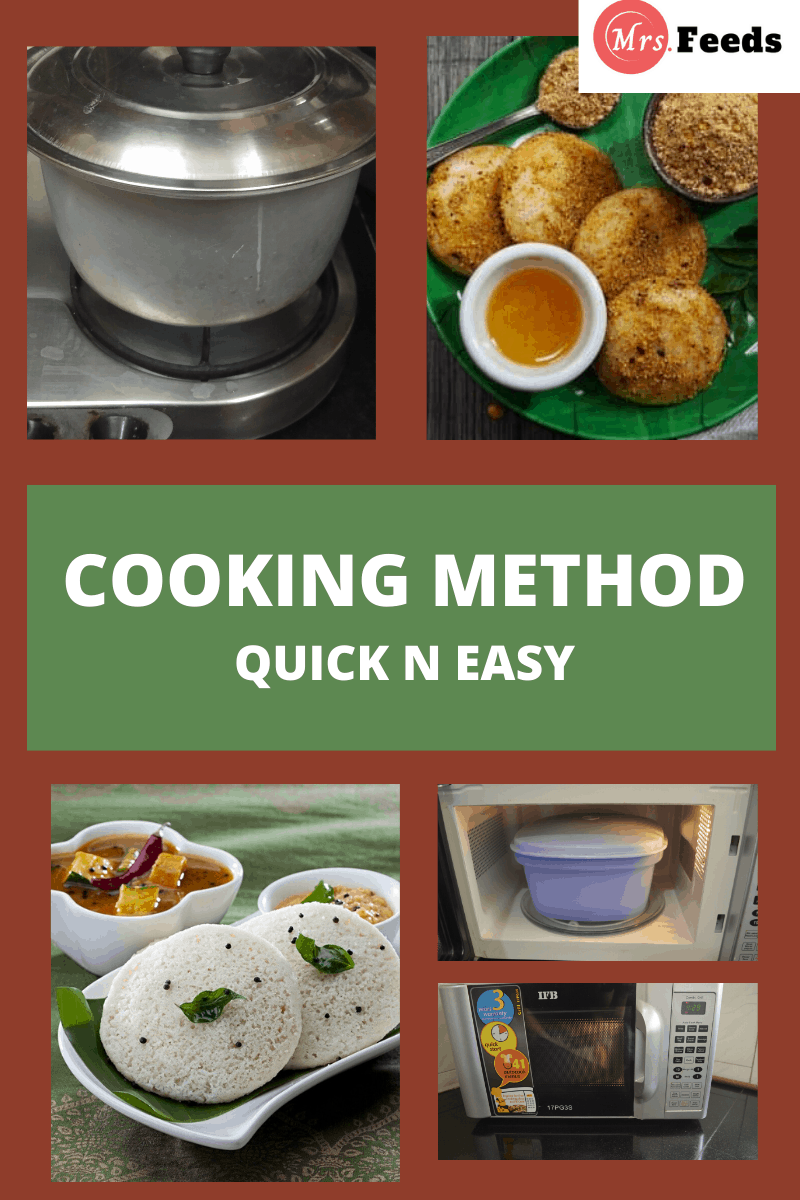 Rice idli is such an amazing food which can be used in various ways. It can be your breakfast, dinner, evening snack, early food for babies and best travel food.  Rice idli recipe in microwave is a recipe something that I adapted from my MIL’s recipe. It is so amazing to learn from her how she makes the softest idli in the world.

Being born and raised in Tamil Nadu, I have always enjoyed making this super quick and easy Rava idli for my family. Rava idli is the best  travel food i have always had right from my childhood days. Rava idli recipe in Microwave is one of the simplest and quick breakfast anyone can make

I live in the food hub of South India – Chennai and would love to make Podi Idli recipe – A traditional recipe in cooker. This delicious dish will make an impression on you. I prepare them for breakfast and snacks for my family

Hope my current blog has given your better clarity to make your choices of rava idli rice idli based on the various dimensions discussed here.  If you are interested in the culinary comparison of Thai and Indian food, you will be amazed to know the similarities and differences of these two cuisines.