Mexican foods that resemble Indian foods are incredibly similar. As an Indian, I was surprised at the way both food match. And this despite them being from two entirely different corners of the world.

In my current blog, I would like to share with all you lovely people all the kindred foods from Mexico and India.  They are alike in form, flavours, look and even taste in some cases.

If you have more such flavours to share, feel free to discuss them with me in the comments section at the end of this blog. After all, the more food enthusiasts around, the better it is for the food community. 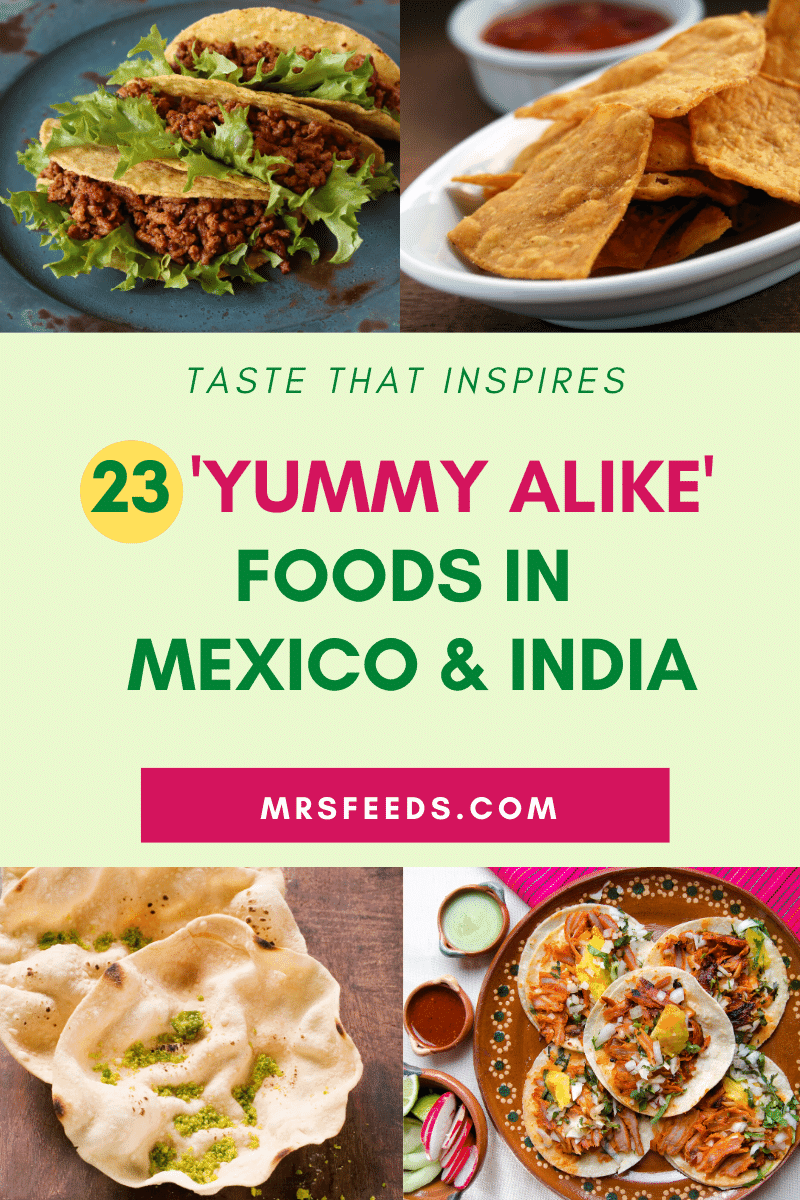 The world is more similar than different, I guess. At least, after consuming Mexican food I’m pretty confident to make that assertion. It’s time to know Mexican foods that Resemble Indian Foods. 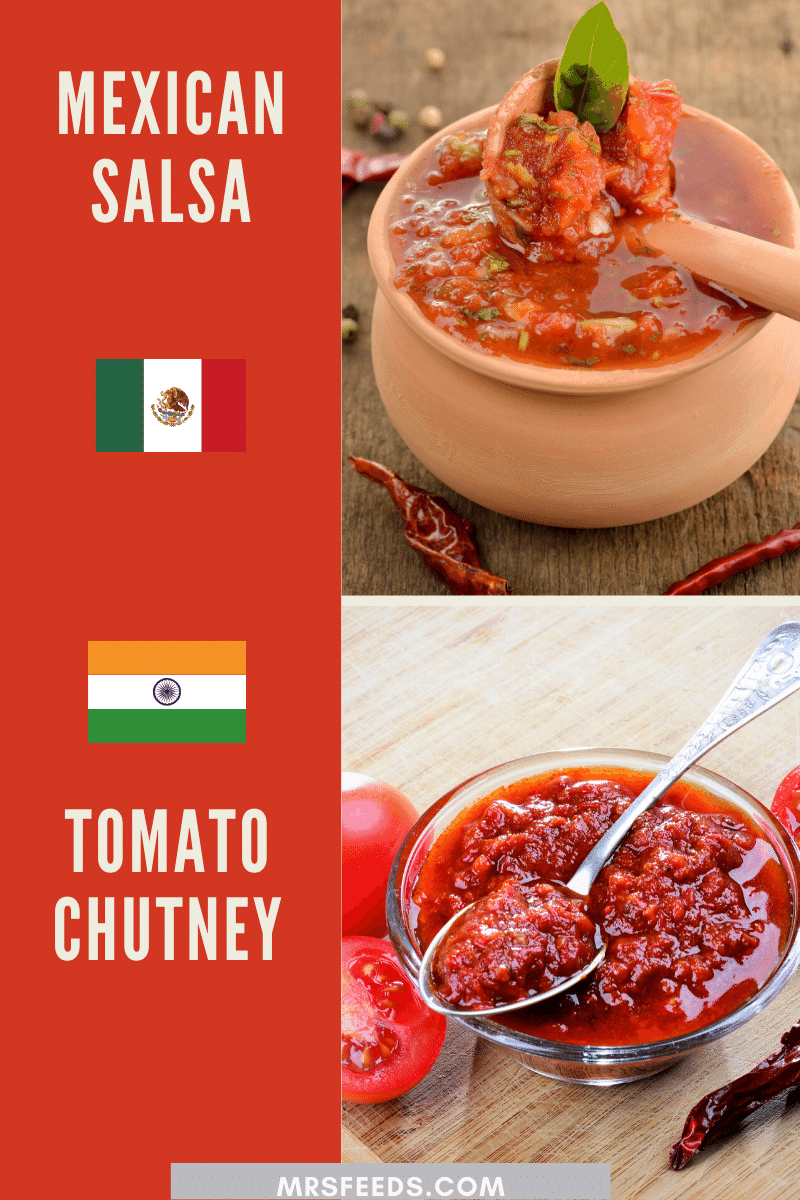 Plantain Banana Chips are extremely popular in Mexico. Plantains are essentially members of the banana family. However, they are lower in sugar. They remain greenish-yellow even after ripening. The plantain banana chips resemble the Indian banana chips closely.

In India, especially Kerala, fried Banana Chips are consumed massively. Raw bananas are sliced and fried in coconut oil. This makes them crisp. You can even store Indian Banana Chips in glass containers for days together. Over the years, these banana chips have become palatable across India. 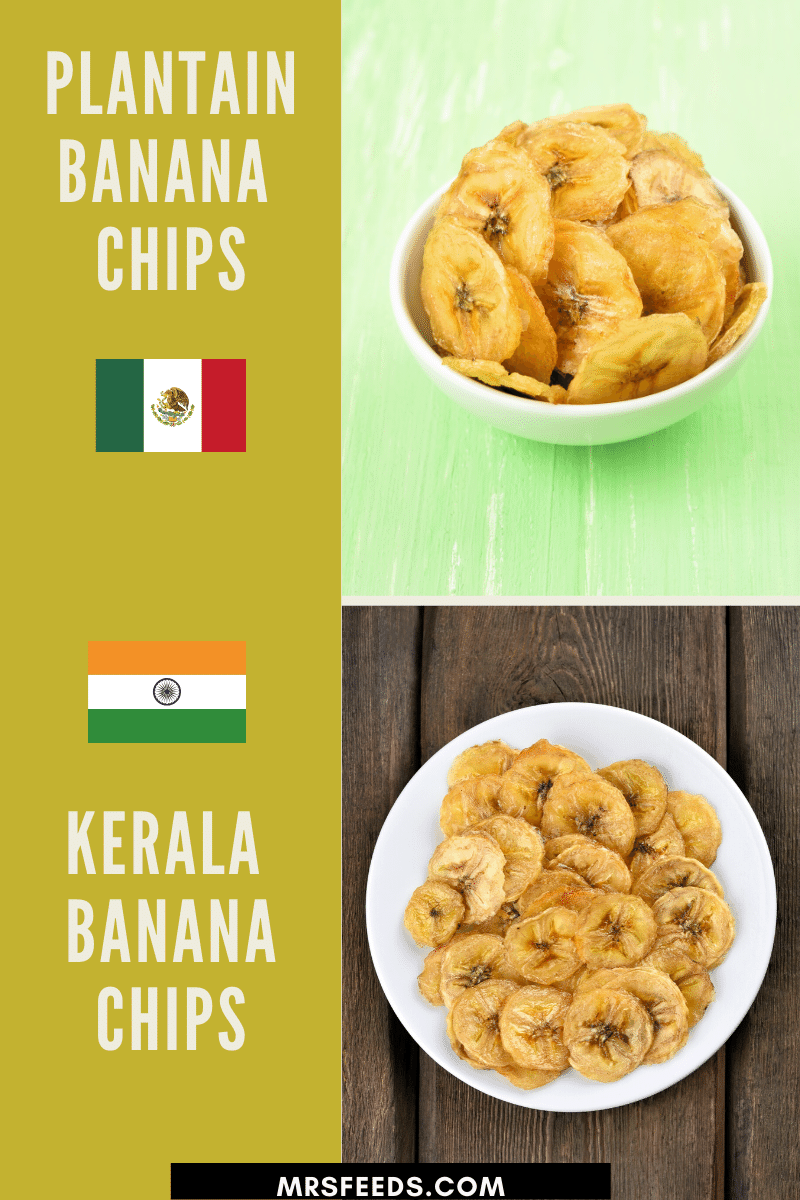 Cocadas, also known as Cocodas is a famous coconut confectionery item in Mexico. In some parts of the region, it is flattened, even fried. But in most other parts today, it is served in the form of round coconut balls. And this is where it has a striking similarity to India’s Delicious Coconut Ladoos.

In India, coconut crumbs are mixed with sugar or jaggery. They are then mixed with Desi ghee (clarified butter) to form round shaped delectable Coconut Ladoos. They are mostly prepared on special occasions like the Indian festivals of Holi and Diwali. They are even served at temples as Prashadam (religious offering in Hindu temples). 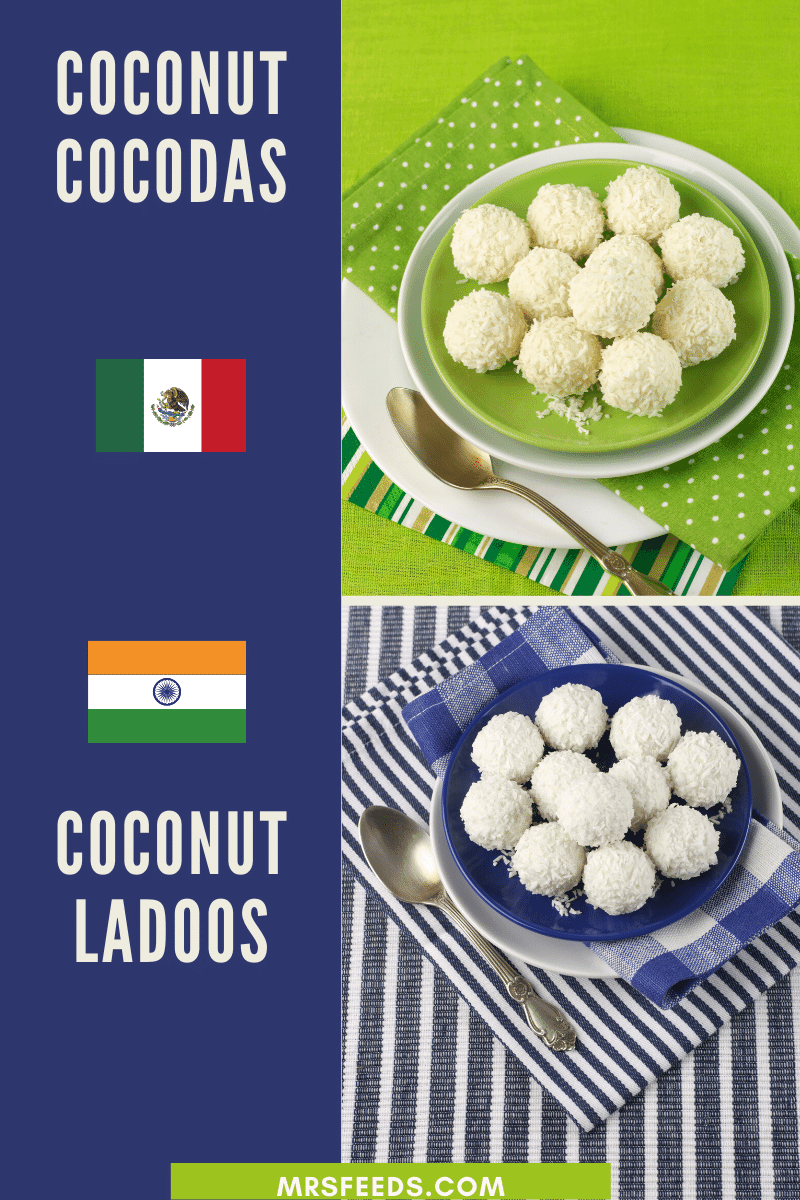 Baked beans are a very versatile food in Mexico. It is consumed along with various other foods, during breakfast, snacks, lunch, and dinner.

In India, our very own beans are known as Rajma. It is mostly consumed as the main dish especially in the northern parts of the country. Rajma goes well with white Basmati rice. 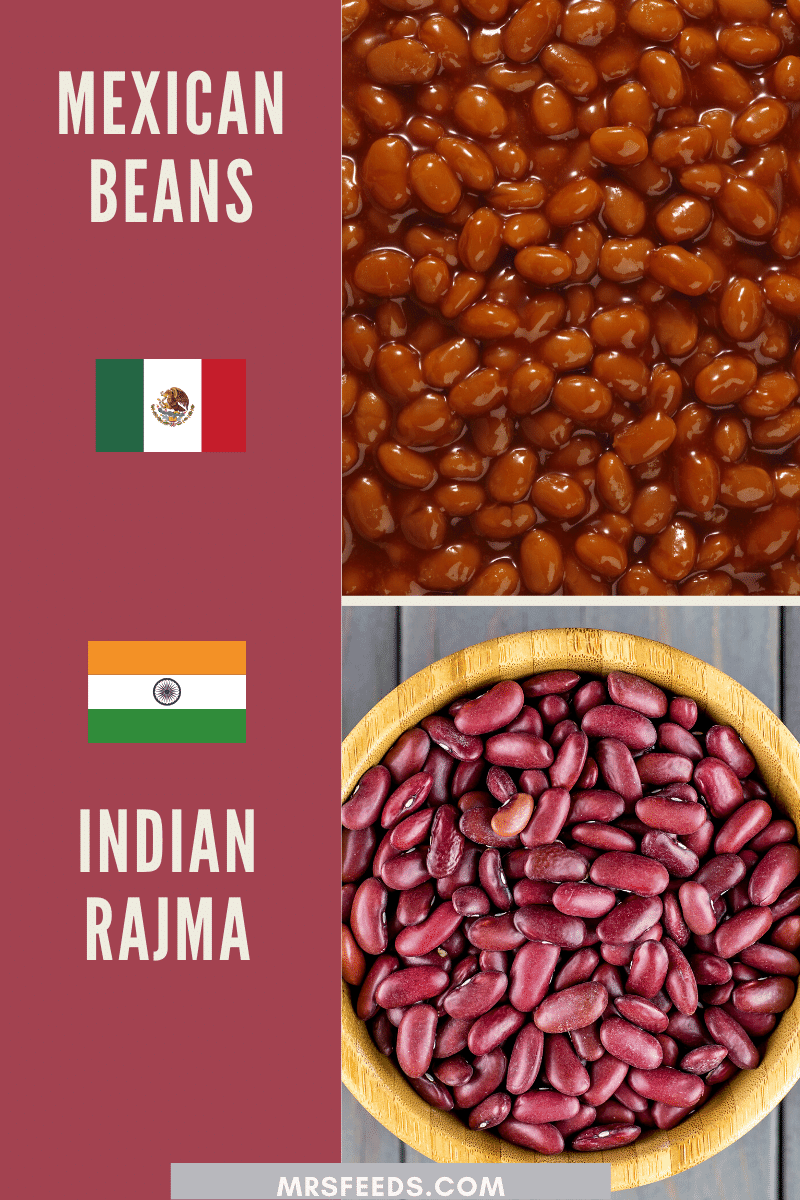 Mexican rice is extremely popular in various parts of the world outside the South American nation as well. It isn’t really a main dish but a side dish. Also, sometimes it is used as an active ingredient for other main dishes.

In India, a very colourful and delectable rice preparation by name of Pulao is popular. It is consumed as the main dish itself and can be an assortment of lots of vegetables and sometimes meat. 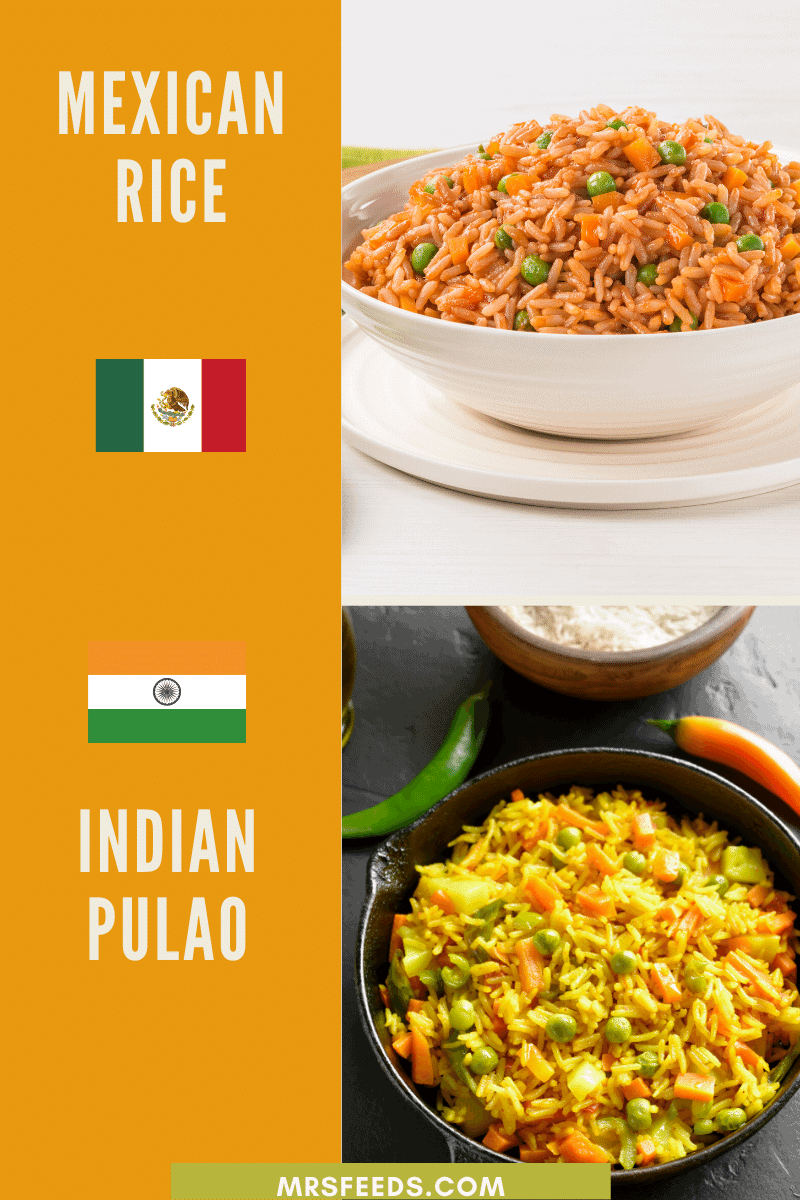 Alegrias Mexicanas more popularly known as Mexican Popped Amaranth Candy. It’s more of a snack than a dessert. It’s crunchy in texture and sweet in taste. Moreover, it’s a fun food to consume.

In India, we have our very own pop snack popularly known as Rajgira Chikki. Just like the Mexican Pop Candy, Rajgira Chikki is crunchy, sweet, and comprises of amaranth seeds. 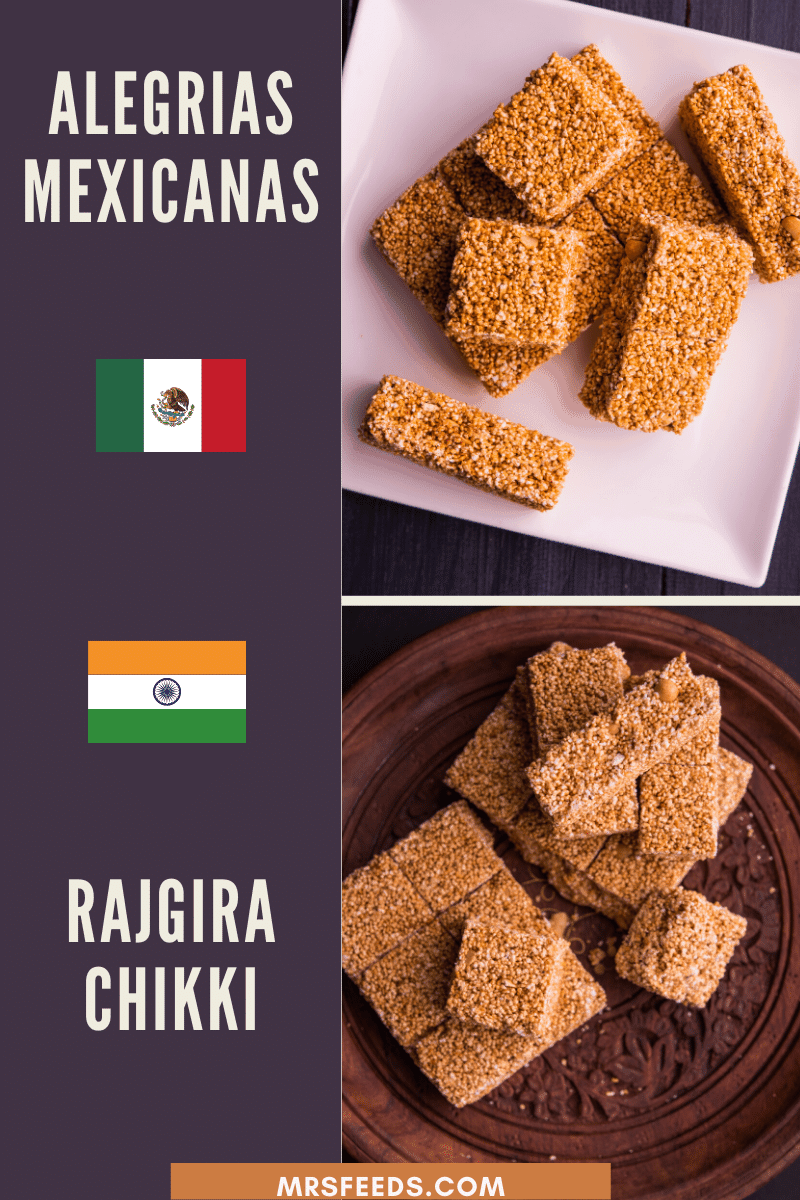 Chappati, also known as Roti is an extremely popular staple food consumed widely across India. It is prepared from making a wheat dough and made into thin round shapes. Each bite is consumed by dunking in curry or veggies. 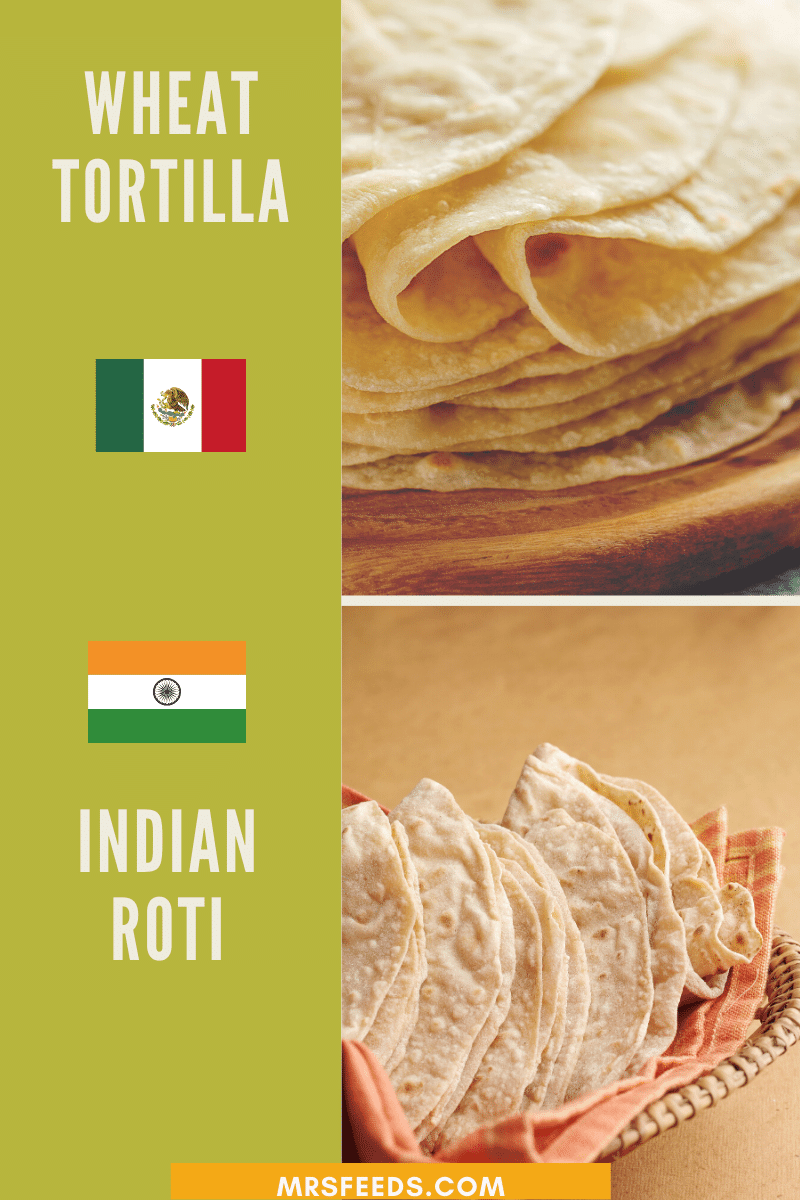 Totopos are a modified version of Tortillas. They are consumed in two ways – baked or fried. They can be easily made at home and are usually consumed with dips of various kinds.

The Indian pappad is also a modified form of the ordinary flatbread. However, unlike their Mexican counterparts, they are not baked usually. They are preferred in fried form more. 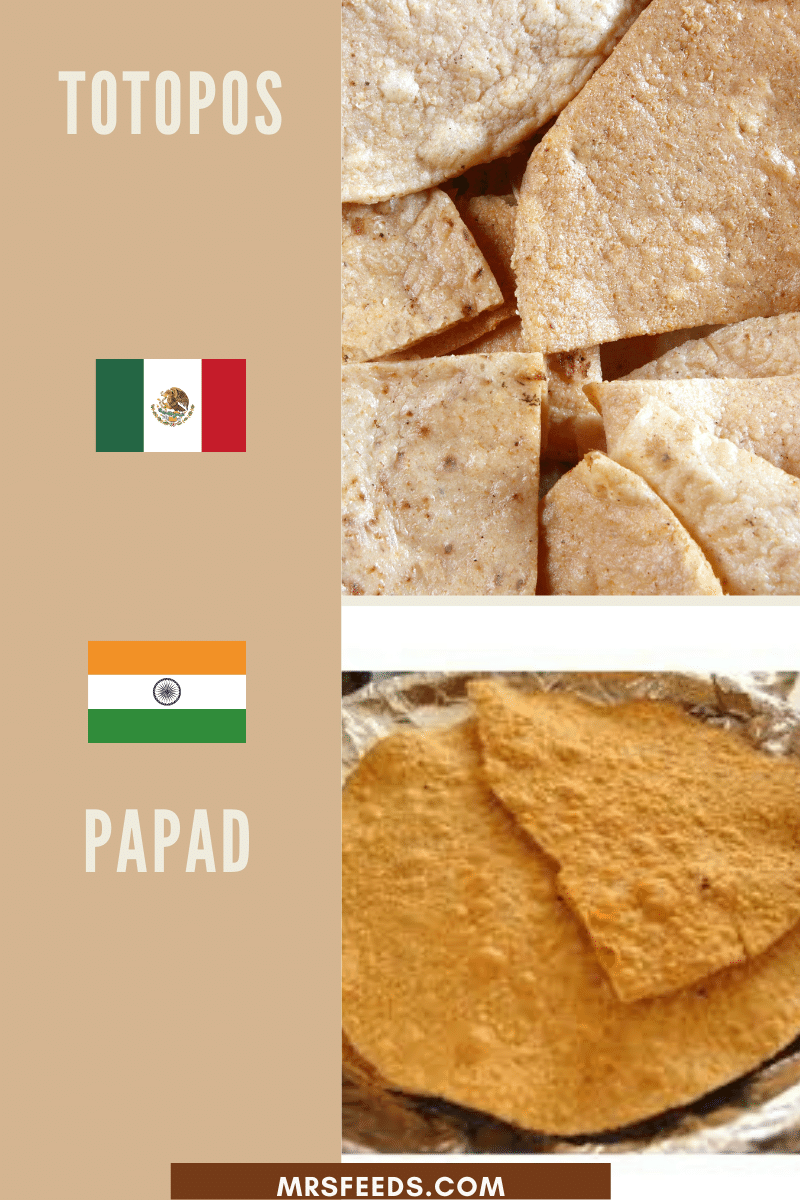 Elote is a yummy snack comprised of cooked sweet corn sprinkled on by in a spicy mixture of mayonnaise, crema, and chili powder. Sometimes cheese is sprinkled as well. Mexican folks savour it a lot as street food. Also, on festivals.

In India, Bhutta is synonymous with spicy or sour sweet corns sprinkled on by fresh lemon. They are semi roasted on vendor stalls across streets in India.

A gordita is a Mexican dough pastry. It is always filled in with something. Mostly, this stuffing comprises of meat and cheese. It’s relished across Mexico.

The gordita closely resembles the Indian stuffed parantha. In India, the fillings can range anything from flavoured mashed potatoes, cottage cheese, cauliflower, peas, and even leftover lentils from the previous night. 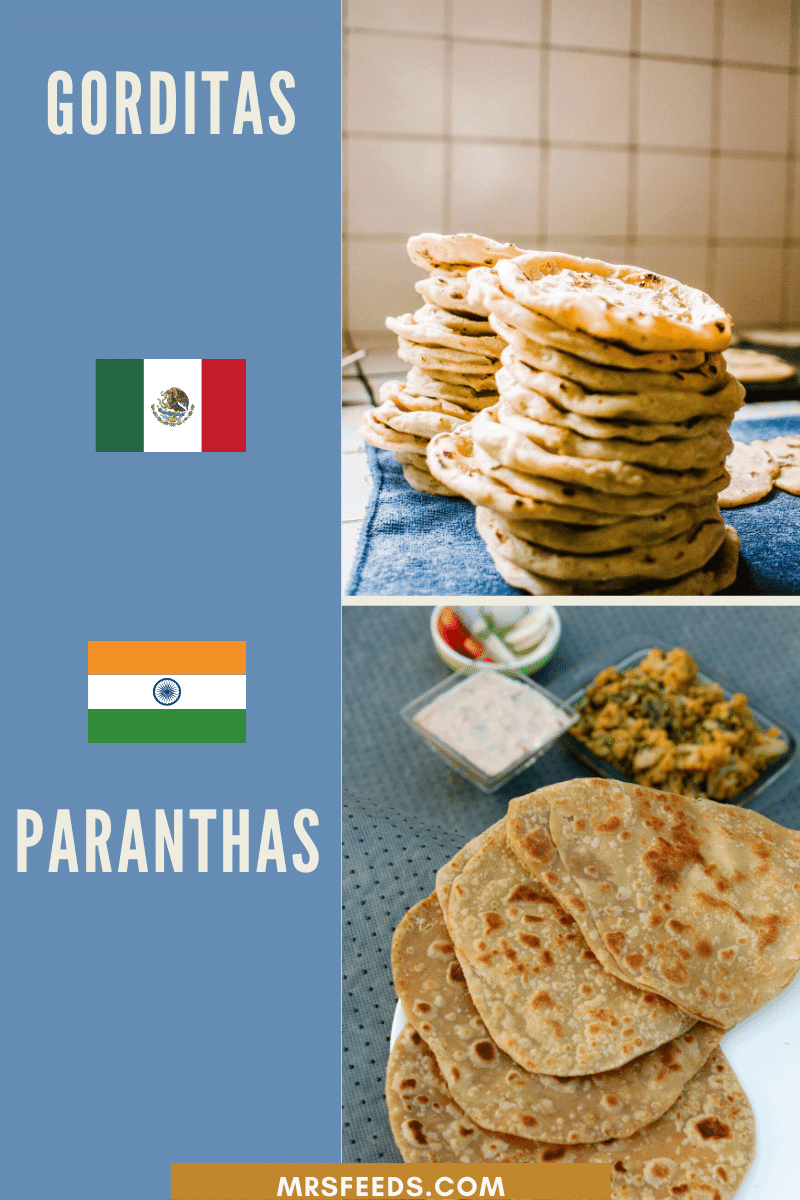 Churros are deep-fried pastries sprinkled with sugar powder and cinnamon. It is consumed with sweet flavoured dips. Churros are a popular sweet snack that are consumed across Mexico.

Shakkarpara is known by various names in India. Also, the shape of the dessert is different in various parts of the country. It is deep-fried sweet and are dunked in syrup. 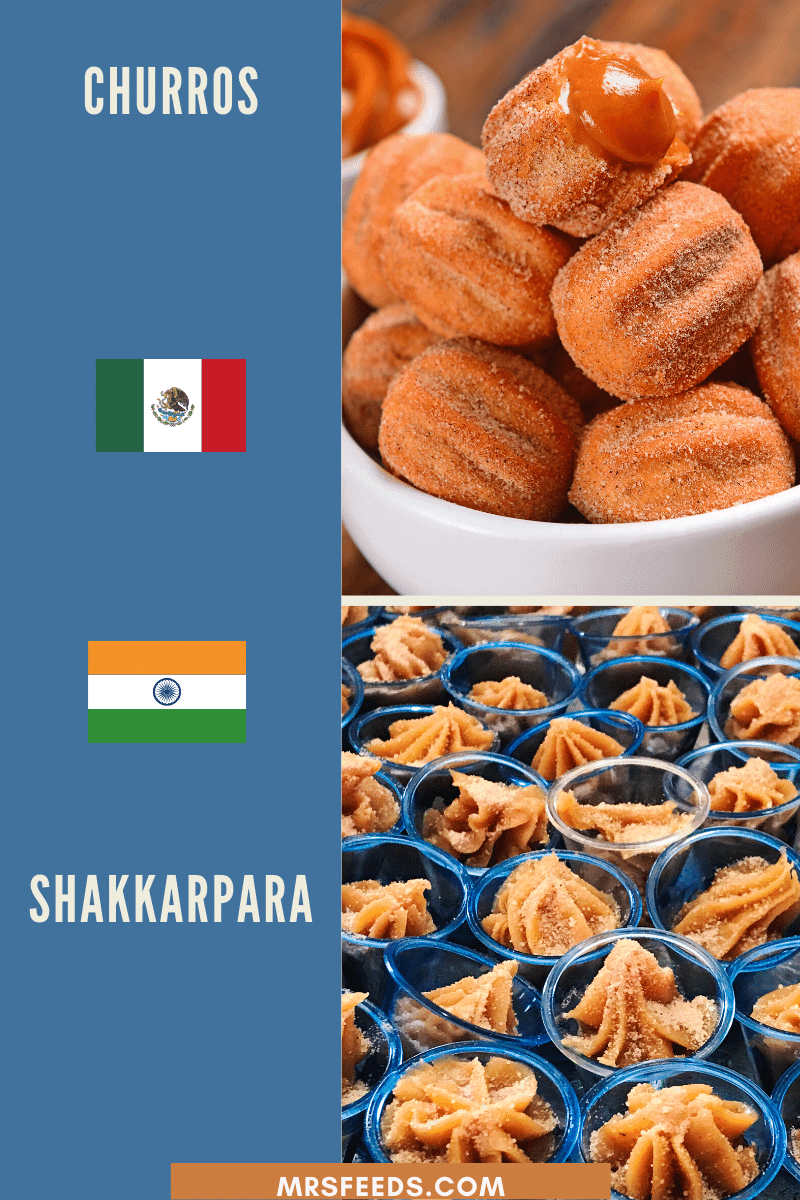 Tostadas are corn tortillas with toppings of various vegetables or even meat chunks. Tostadas are an extremely popular food in Mexcian streets as well in Mexican restaurants.

Masala Papad is a delectable snack that comprises of a basic fried papad base. On top of the papad are sprinkled fresh-cut vegetables along with a few native sauces, although these sauces are optional. 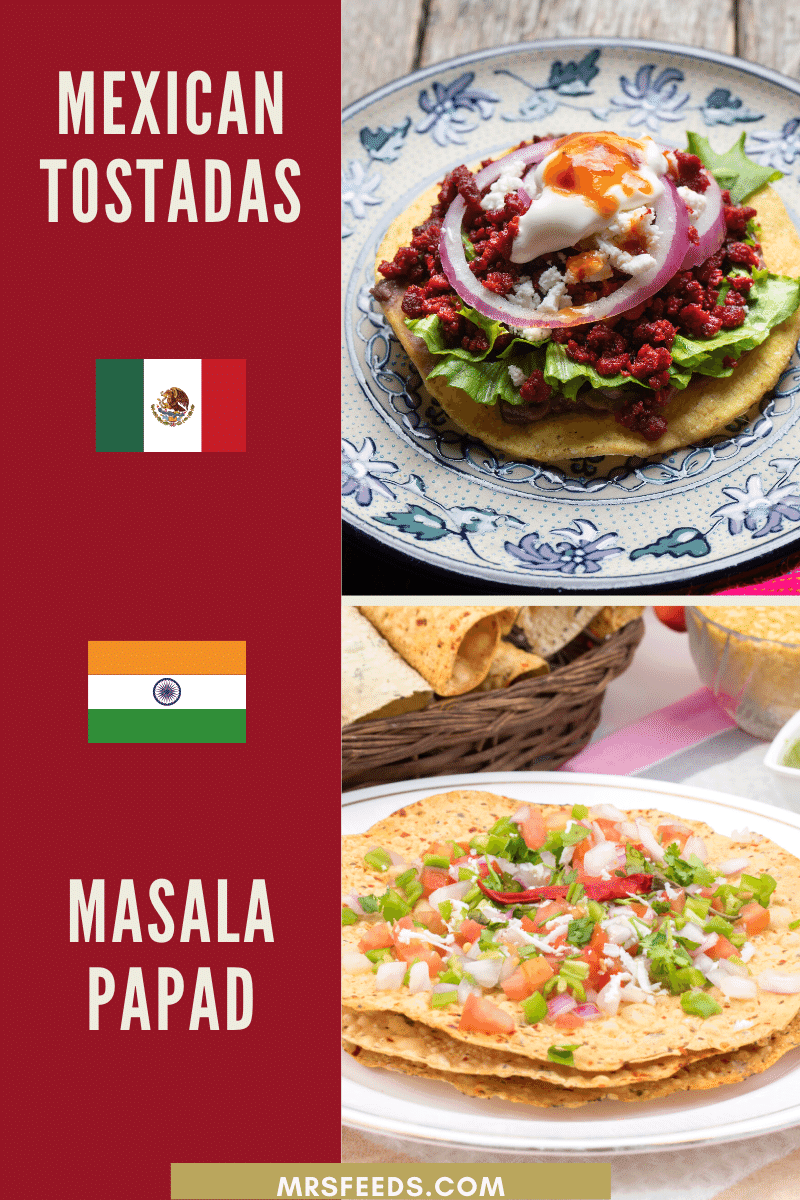 Huevos a la Mexicana are Mexican style scrambled eggs, cooked in a sauce of tomatoes, onions, and jalapeno. It is a very popular Mexican breakfast item.

Anda Bhurji comprises of two words – Anda (egg) and Bhurji (scrambled). This is an easy to make breakfast item that is consumed with wheat bread or rotis. Tomatoes, onion, and aromatic spices transform scrambled eggs into a wonderfully flavorful meal. 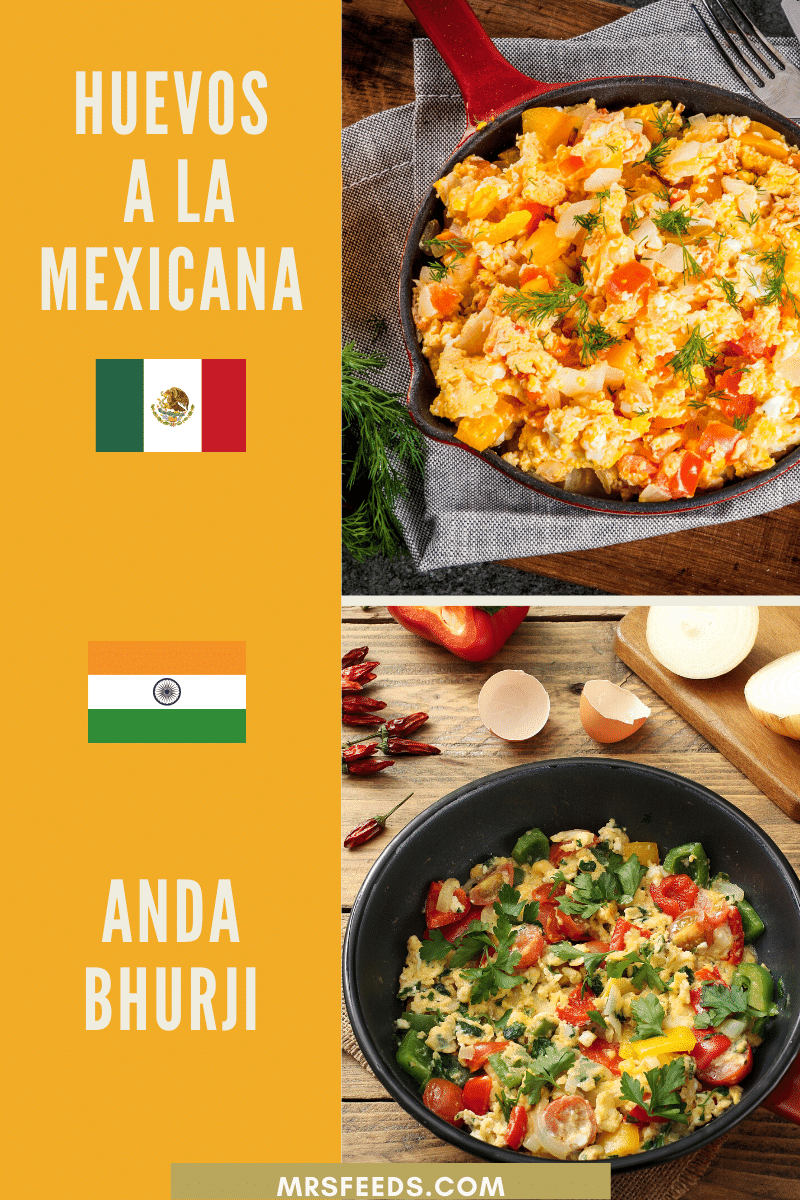 Arroz con leche is a kind of Rice pudding dish made from rice mixed with water or milk. Also, a variety of other ingredients such as cinnamon and raisins. There are numerous variants of this dish depending on your taste.

Rice Kheer is the Indian version of Rice Pudding comprising of cardamom powder and saffron. It can be consumed fresh or after cooling. 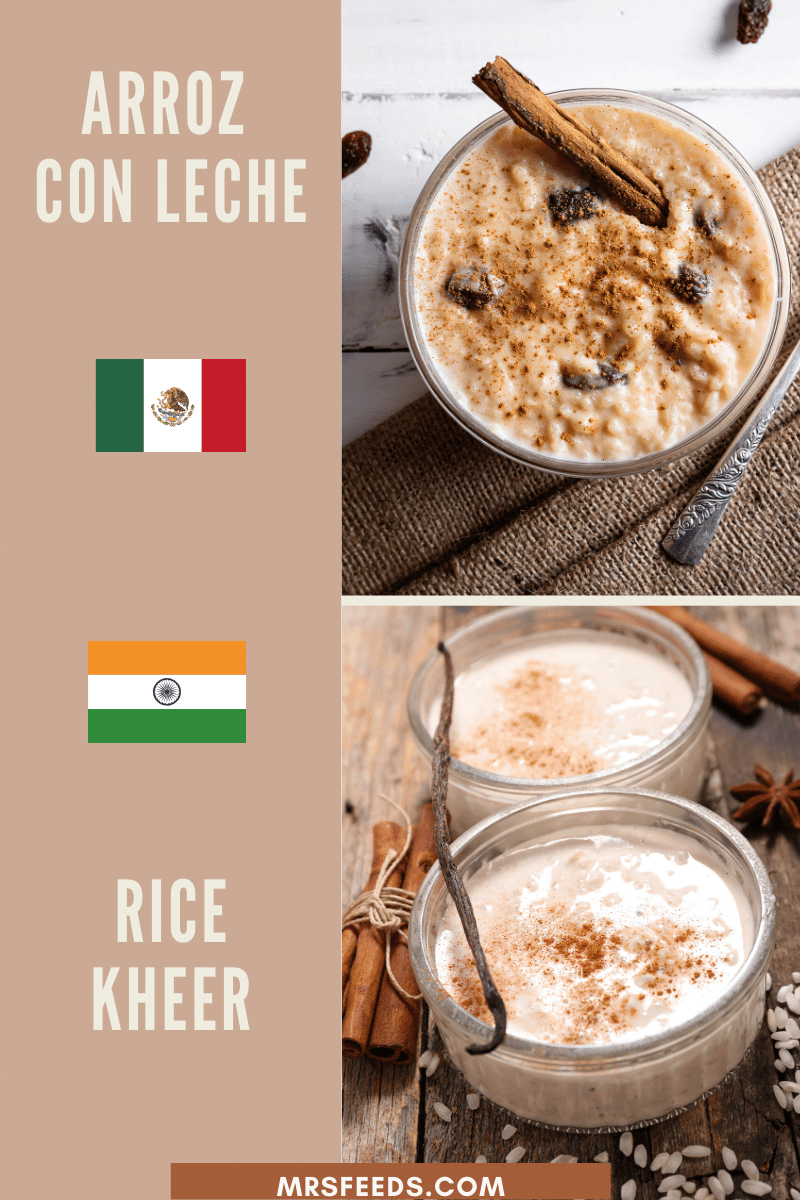 Jamoncillo de leche is a typical Mexican confectionery item similar to fudge. It is made with milk, sugar, and nuts. Shape wise, they are made into logs or squares.

Peda is a popular Indian sweet made from mawa or khoya and sugar. It is semi-soft, like fudge, and comprises a small depression filled with either cardamom seeds, pistachio nuts, and/or saffron. 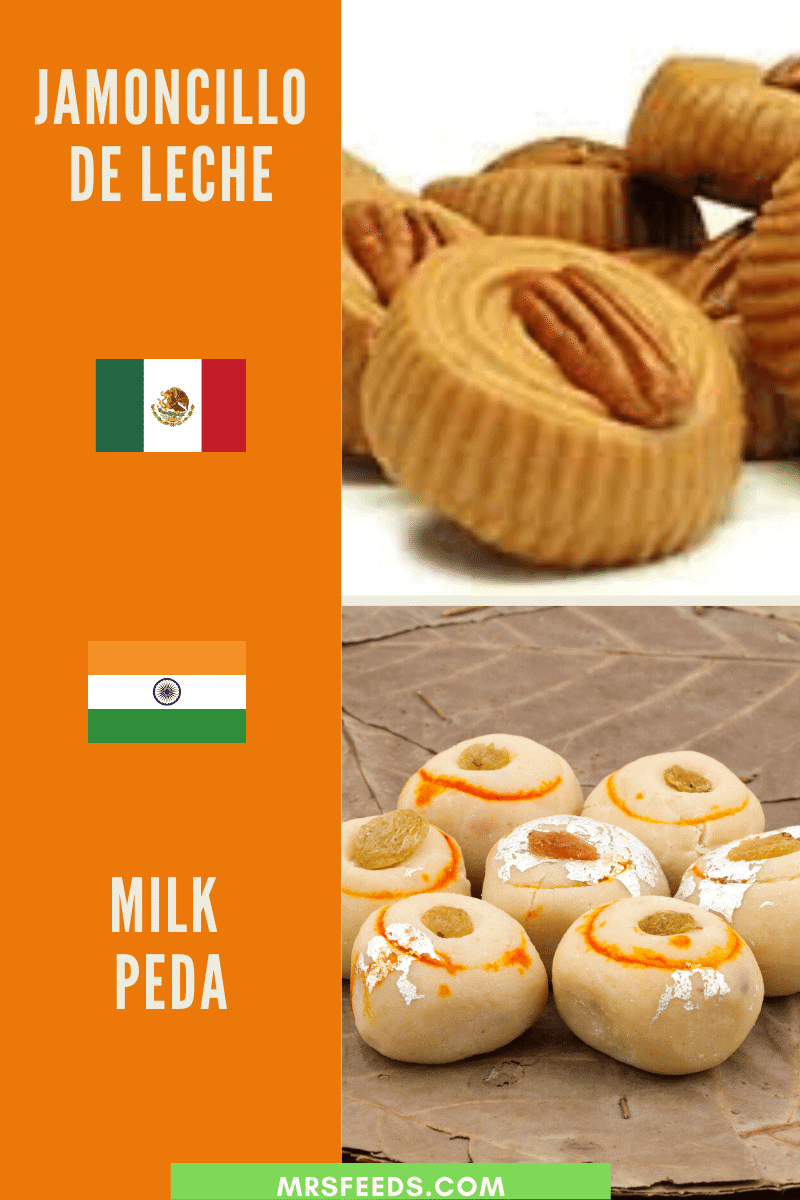 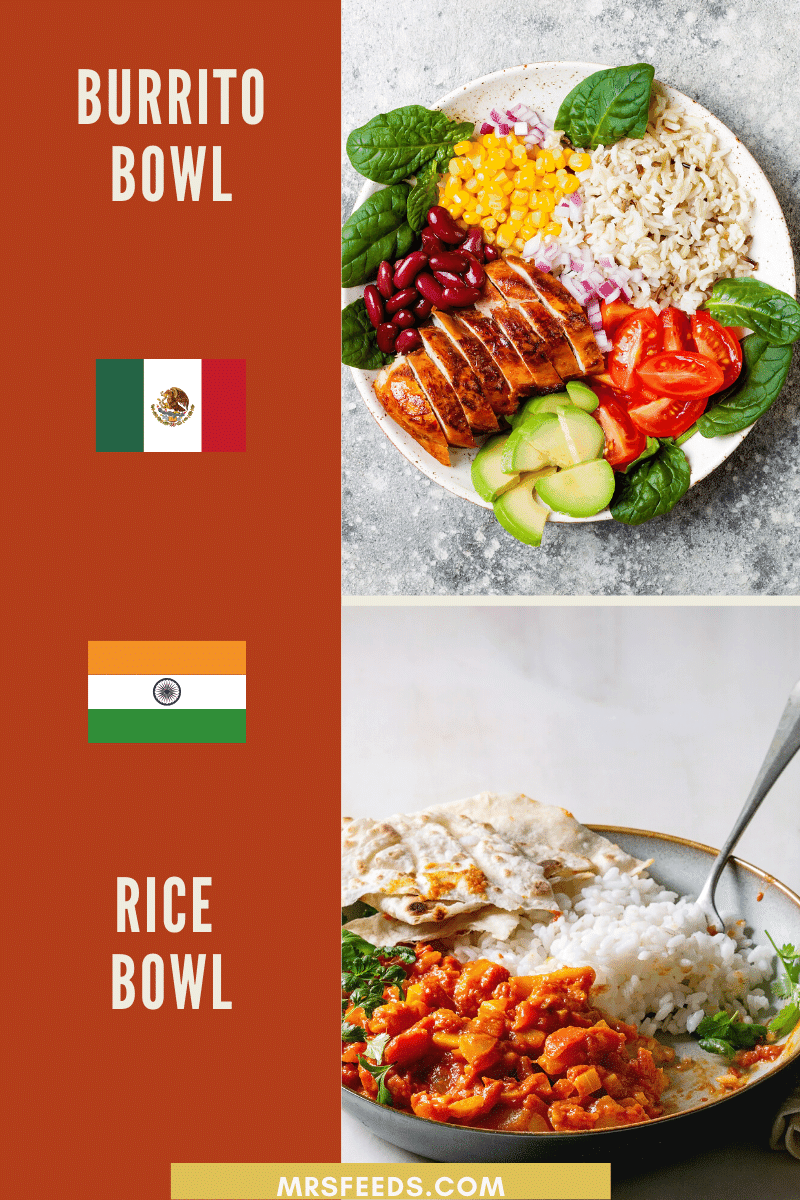 Chicken Mole is a perfect blend of sweet and spicy flavours in Chicken. It is a lovely preparation of a large diversity of ingredients required to make ‘mole.’ They comprise of chillies, sour, sweet fruits, spices, and thickeners.

In Mexico, Tamales are a popular snack that is prepared from Masa (corn dough). This is then steamed with corn dusk or even leaves of plants like banana.

Ella Ada is an Indian sweet, consisting of rice parcels enclosed in a rice flour dough. To this dough is added, fresh coconut and jaggery. It is then steamed in banana leaf and served. 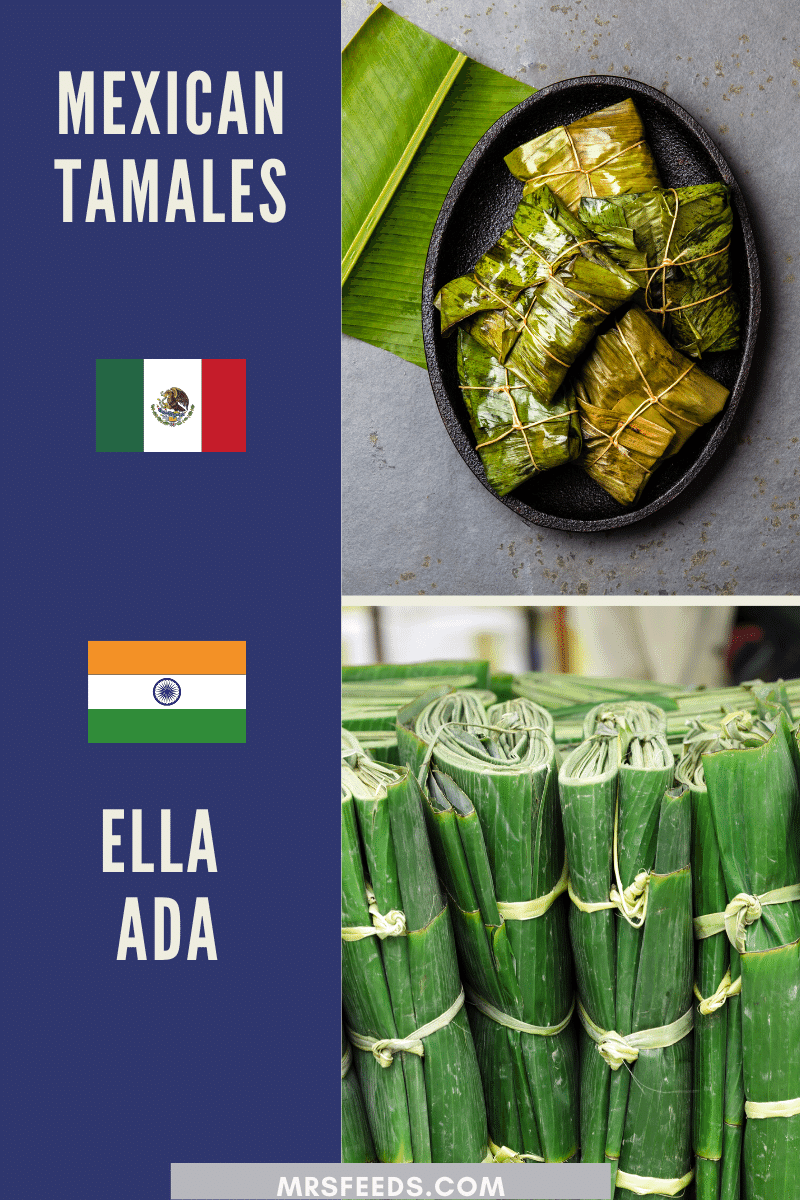 It is interesting to share that Samosa isn’t Mexican originally. It was introduced in Mexico by a couple of travellers. That is how it entered the street food markets. A Mexican Samosa is baked.

One of India’s favourite tea snack is the Samosa. An Indian Samosa is essentially a fried pocket of dough that is triangular in shape. It is stuffed with mashed potatoes, a variety of spices and peas. Over the years, people have been eating baked samosas as well. 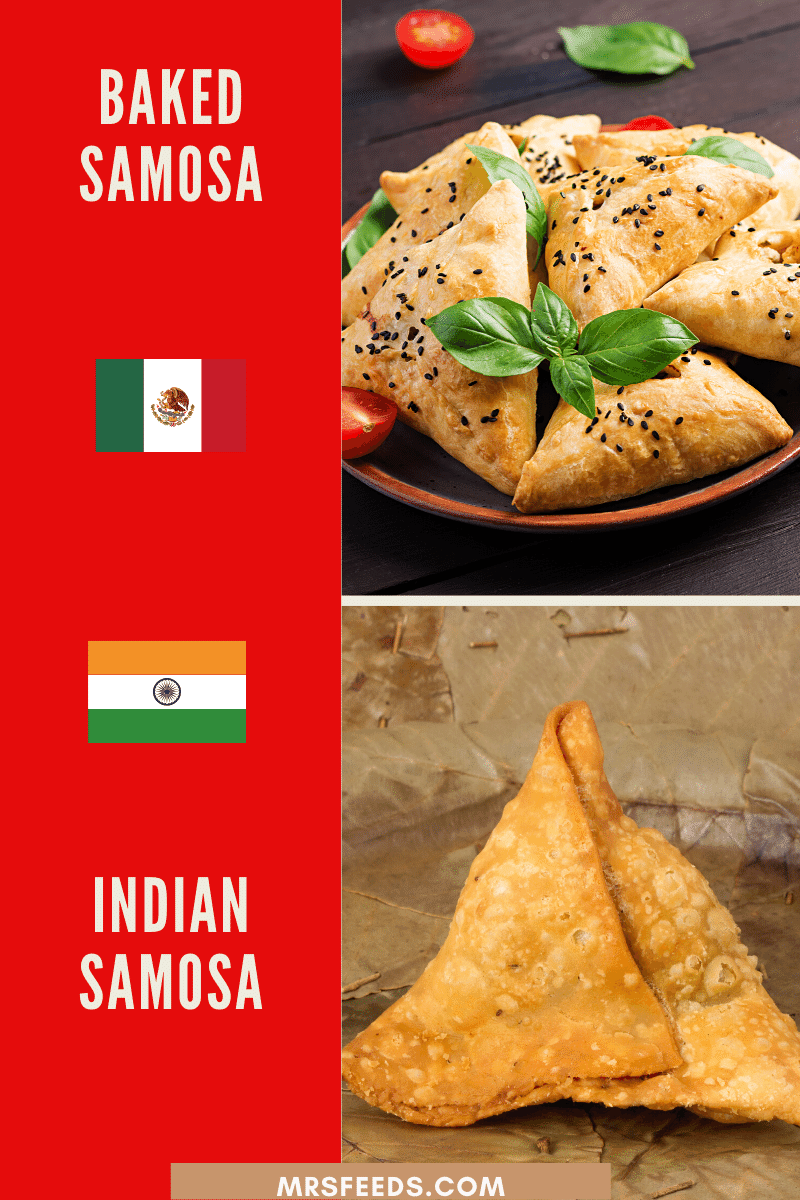 Makki ki Roti,  also known as Makki di Roti in the north Indian state of Punjab is extremely delicious food consumed widely across North India. It is prepared from making a corn dough and made into thin round shapes. Makki rotis are usually consumed along with saag (mustard leaves). 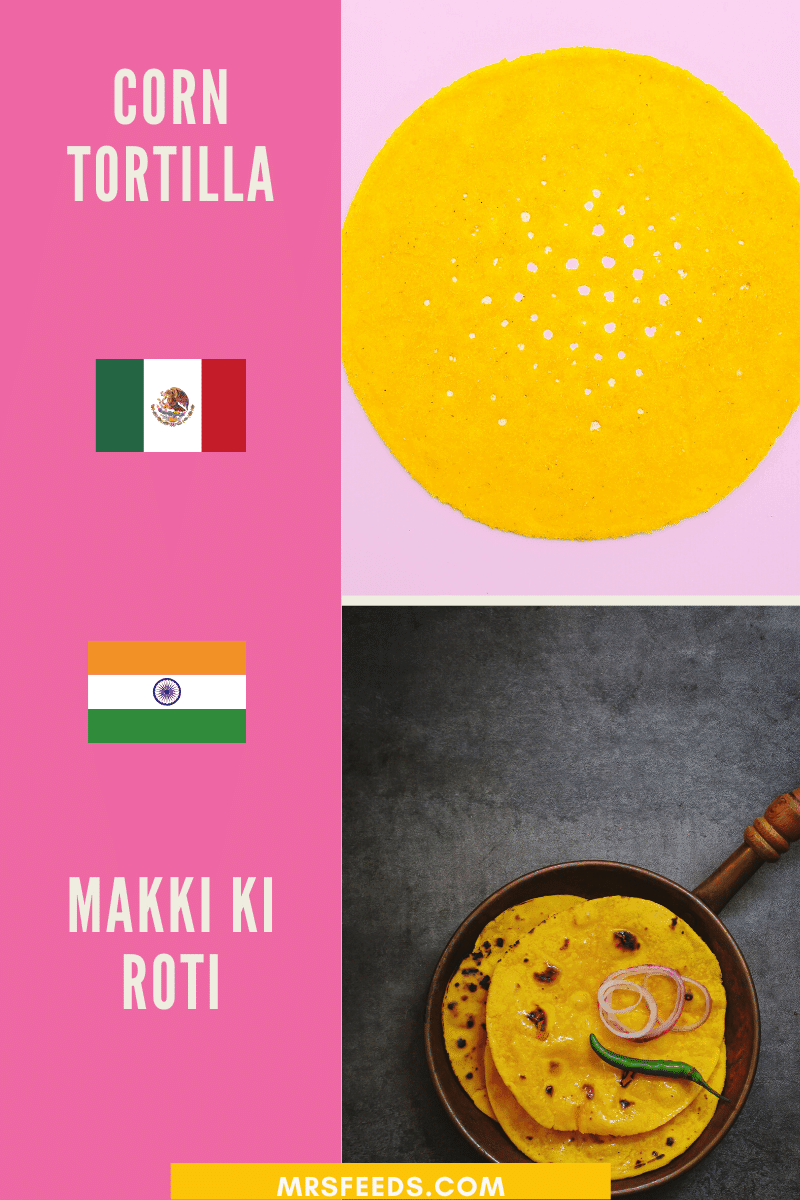 Empanadas are a beloved dish that is popular all over Mexico. They are basically dumplings stuffed with meat, cheese, corn, and vegetables.

They look very similar to Indian Ghujias in shape. Ghujias are an Indian dessert.  They are deep-fried dumplings, stuffed with coconut, dry fruits, etc. Their taste is nothing less than divine. 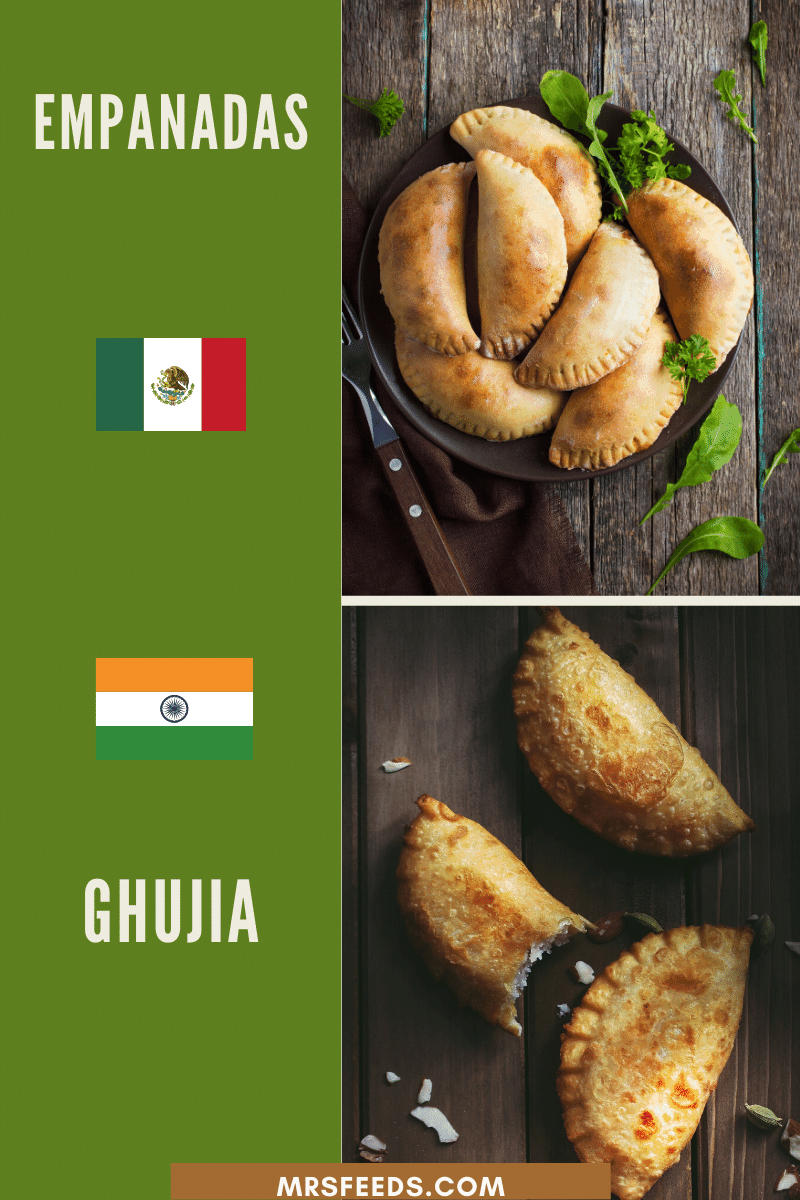 This Mexican Chocolate Fudge recipe is the most amazing combination of spicy and sweet flavours. Well, Mexicans love their spicy food so much that even desserts have a spicy flavour.

Khoya Barfi comprises of a light sweet flavour. Khoya (khoa) is an essential part of this sweet cube. Khoya Barfi is very simple to make but tastes delicious. 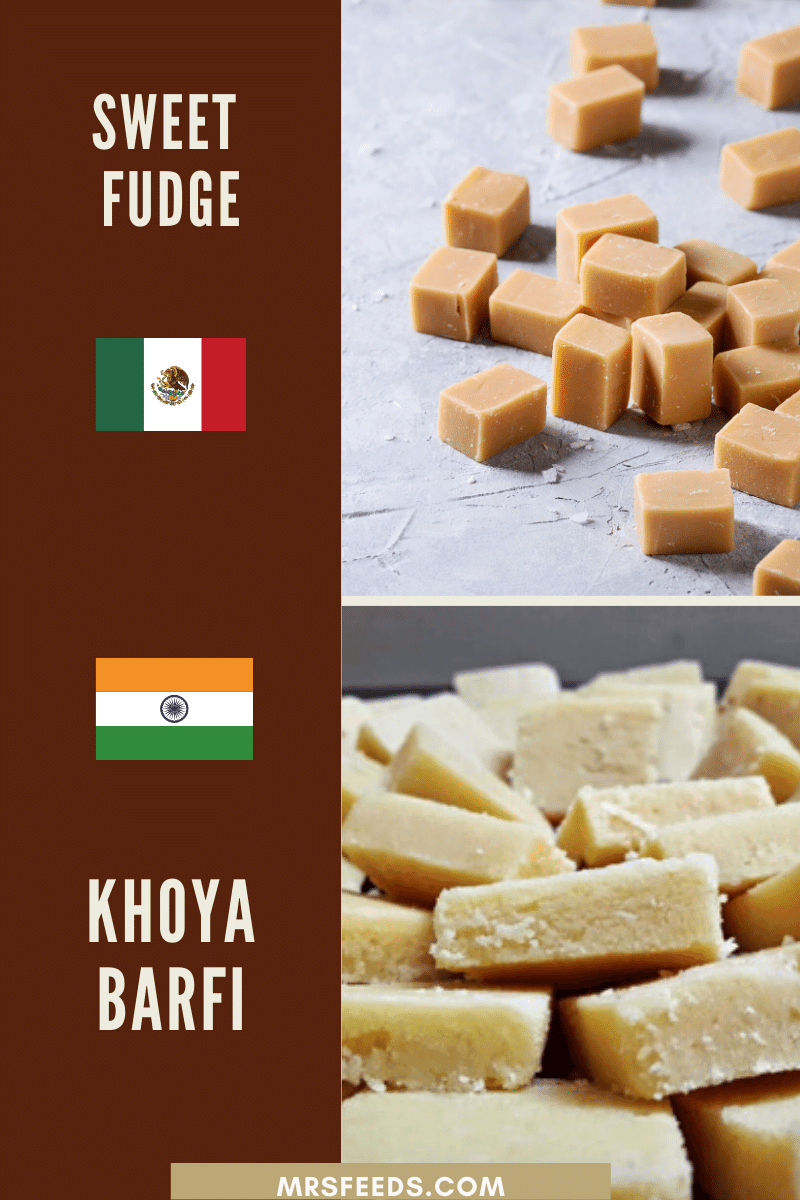 A decent assortment of veggies, mayonnaise, salsa is what goes into preparing a Mexican grilled sandwich. It can be served as a meat sandwich as well.

Bombay Sandwich isn’t any ordinary bread sandwich. It is a sweet tangy sandwich native to the financial capital of India – Mumbai. Bombay sandwich comprises of an assortment of veggies served with mint chutney. 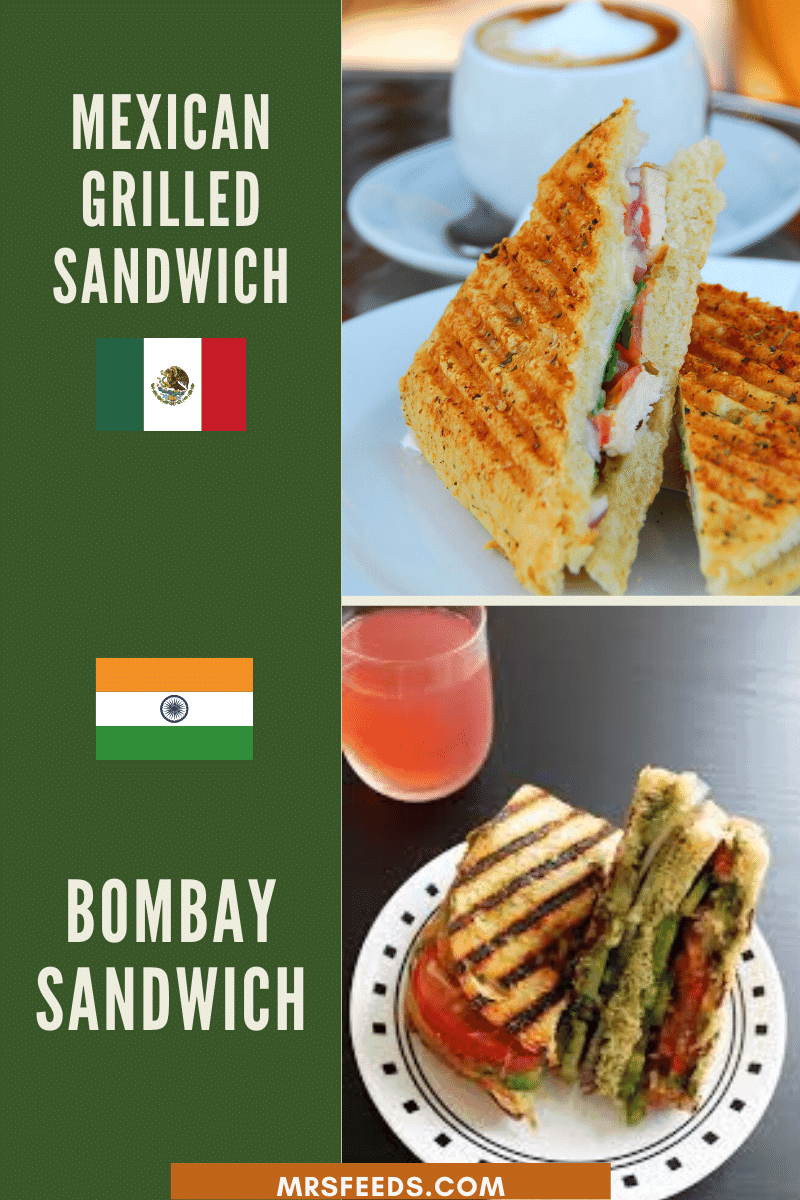 I hope that the comprehensive list of Mexican foods that resemble Indian foods shared in this blog came across as insightful. Do share more such foods with me in the comments section below.