Do you want to know if Rava idli healthy or not ?

Is Rava idli healthy ?.  I am sure this is a common question in many of our minds. Well, it will not be fair to say it’s unhealthy or healthy without analyzing it.  A complete understanding of the pros and cons of the food is very much required for this.

In my current blog, I would like to explain different aspects of Rava idli. This will help you understand why Rava idli is healthy or not. So that you can use the Rava idli accordingly as part of your breakfast or snacks or dinner.

Rava idli is commonly prepared mostly in Andhra, Telangana, and Karnataka. While in TamilNadu commonly made idlis are the rice idlis. So let us get started to understand more about the Rava idli. 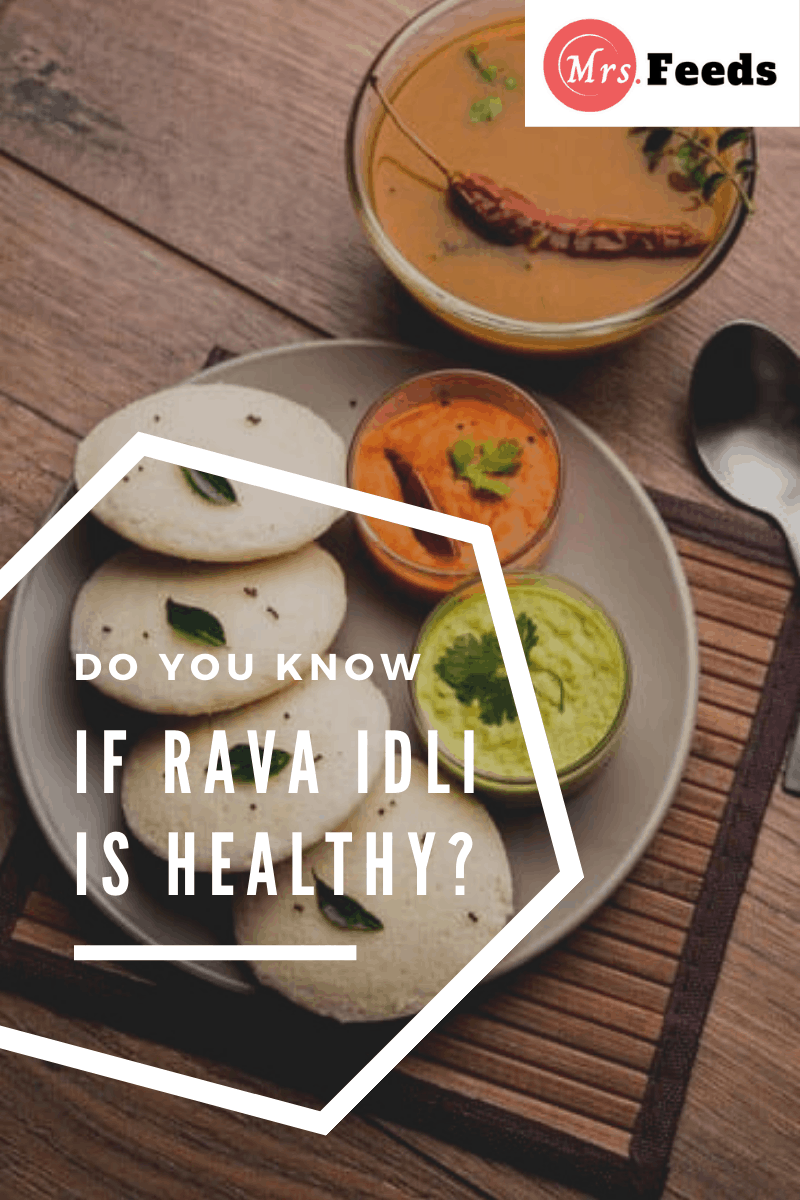 Idli is a very common breakfast in the South Indian Kitchens. Over a period of time, idli has become quite popular across India. Since these steamed cakes are preferred by many Indians, it is served across in many restaurants in India.

There are always mixed opinions about the Rava idli being healthy or not. However, I strongly believe Rava idli is healthy and has many interesting benefits  Let us look into some interesting aspects of Rava idli.

According to the health experts, Calories in Rava idli is very less which makes the Rava idli ideal for weight loss. So Rava idli is highly recommended for diabetic patients than rice idli.  If you are a person of fitness, then Rava idli is one of the most recommended breakfasts in the mornings. Idlis with different variations are often considered to be very nutritious and tasty. Let us look at the calories in one Rava idli

It takes time to digest the Rava idli. Because of the time taken for the digestion, it feels full for a longer time. Also, the food gets converted to sugars in the body slowly. hence good for the diabetics patients and people who are on the weight loss journey.

Indians are known for eating food consisting of rice as the main ingredients. Rice is not recommended for the ones who want to lose weight and diabetic patients. Hence Rava idli is really good for weight loss as it is going to keep the stomach full for a longer time. This way the person doesn’t feel hungry soon and the food has all the important nutrients to make it a balanced meal.

Rava idli is very low in fat or cholesterol. If you are looking for healthy food that also keeps your cholesterol in control. Then Rava idli is the best choice. Hence this can be taken as the regular breakfast to keep the fat content in control and also have a filling meal

As it is not made of rice it is very diabetic friendly.  Since it takes a longer time for digestion, the sugars don’t rise faster upon digestion making the food very friendly to diabetic patients. hence they become more consumable as they keep the sugar levels in control.

Rava idli is also rich in Iron and which also helps in maintaining the hemoglobin levels in the blood.  If taken regularly and in the right quantities, it can meet the daily requirement for the iron in the body.

Rava idli has many vitamins, very little fat, and also a good source of iron, fiber, and carbohydrates. All this makes it a complete meal.  Thus Rava idli makes a balanced diet with essential healthy nutrients in it.

Rava idli is very easy to makes unless other breakfasts and rice idlis. Because rice idlis need fermentation which is time-consuming. While the Rava idli is less time consuming and can be prepared instantaneously. Because there is no need for the fermentation process. Just because it is easy to make one cannot eat Rava idli. Since it is healthy and easy to make, it can definitely make a good meal.

Since Rava idli is healthy and can regularly eat to gain all the health benefits. It will be monotonous to eat the same idli. Hence I would like to share a few varieties and you can also check all the idli recipes that can be made at home with different variations to break the monotony.

Idli podi is a coarse spicy powder and when the Rava idli is tossed in the idli podi is the best combination.   This is one of the very popular idlis in South India. YO u can serve as snacks for kids and family. Sambhar and Chutney are the best accompaniment for the podi Rava idli.

Rava idli recipe is a very simple and common breakfast in many of the South Indian Households and especially in Karnataka.  Instead of eating plain Rava idli, you can add the grated carrot with aromatic tempering to the idli batter.  This makes a nice twist to the regular idlis and will go best with chutney or Sambhar.

Oats idli is one of the healthiest idli recipes. It is mostly preferred by weight watchers. You can make instant idli with Rava and oats. I love to use the fermented batter to make the oats idli. Oats are roasted and grounded to a fine powder to mix with the fermented idli batter. You can use the same recipe to make with Rava.

Finger Millet Idlis are also called Ragi idli. Various millets can be used to make idlis while ragi are one of the popular millets for making idlis. If someone is looking for gluten-free idlis, this is the must-try idli recipe. You can ragi flour along with the fermented batter to make them soft and spongy idlis. They taste amazing with peanut chutney. You can use the same recipe to make with Rava.

I am sure you found this blog useful to understand the various benefits of Rava idli. Please let me know your comments below and i will be glad to know.