Indian food versus Thai food makes for a lovely culinary comparison. After all, both these cuisines are rich in flavours and variety.

As more and more people are inclining towards Oriental food, there are two delectable preferences that stand out – Indian food and Thai food.

In my current blog, I will offer insights into both these cuisines. As foodies, this will help you in making your own choice of preferred food. 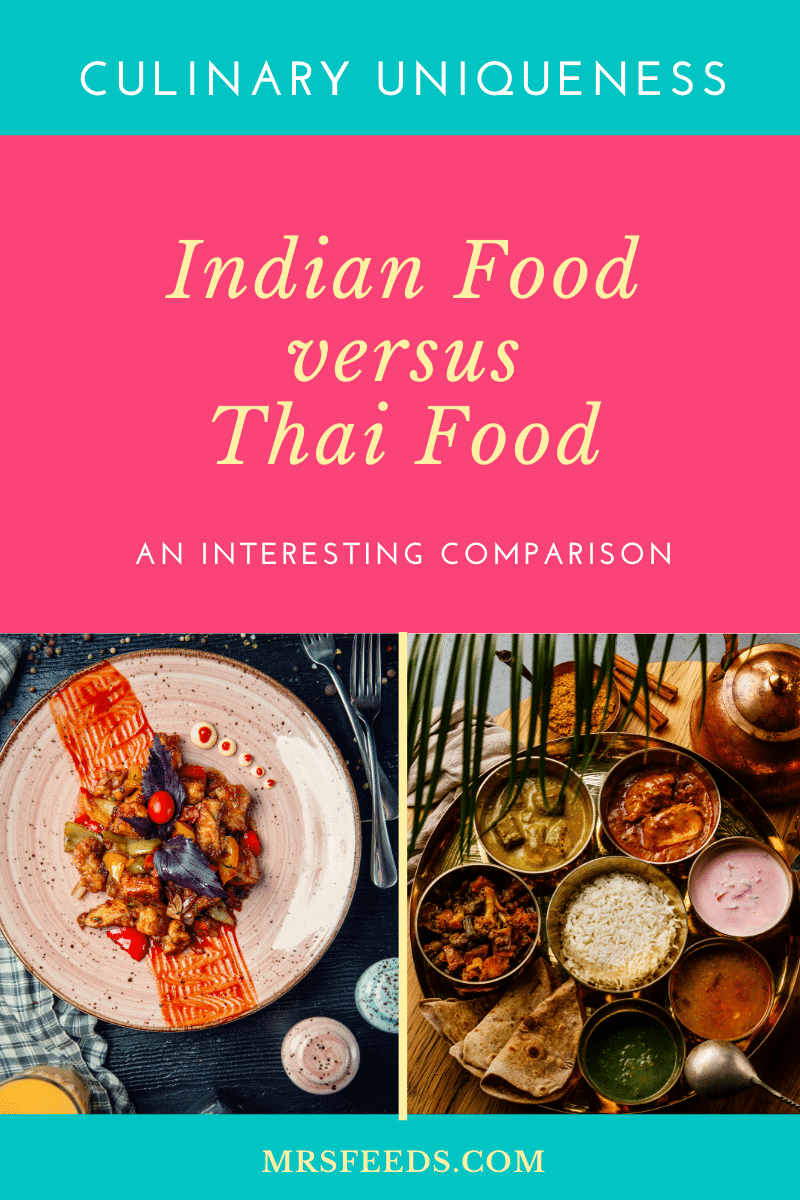 Indian Food Versus Thai Food – Which is Better?

Let me now get started at drawing a valid comparison between Indian and Thai food. I will be covering a total of 22 aspects that concerns all foodies like me.

In case you’d like to add more points of comparison, feel free to share them with me in the comments section after this blog.

To say that one cuisine is better than the other will be completely wrong and unfair. What you like should always be based on your individual choice and taste. Both, Indian and Thai food are sumptuous. Therefore, make your pick based on the upcoming 22 aspects on both cuisines below.

Now that you have a basic comparison of Indian food versus Thai food, let me explain all of these aspects in more detail. This way you will have more clarity.

Livestock is more common in Indian cuisine whereas seafood is more dominating in Thai food. Various dishes comprising of meat and poultry are easily spotted on the Indian Menu whereas Thai food is sea food reflecting.

Dairy is used in various forms in Indian food like milk, cottage cheese, and curd. In Thai food, dairy is mostly absent. The recipes make use of coconut milk instead.

Bread is very common across cultures in India. Various forms of Rotis and Paranthas dominate the Indian menu. However, bread is virtually absent from the Thai menu. If at all, it is used, it is very rare.

Indian food isn’t really noodle centric. However, when it comes to Thai food, noodles are readily consumed as native dishes. In fact, the variety of noodle dishes is quite large.

Across regions in India, long grain and non-sticky rice is used. In Thai food, sticky rice with shorter grains is much more readily used. Both, Indians and Thai folks love rice. But the grain is different.

Most Indian curries are dominated by tomatoes and onions dry spices like cumin, turmeric, coriander powder, red chilli powder, and cinnamon. Thai curries, on the other hand, are prepared from ingredients such as fresh chillies, ginger, lemongrass, lime, shrimp paste, garlic, and shallots.

The consistency across Indian curries is always thick. In fact, the base is always heavy. Thai curries on the other hand almost always have a thin and lighter base. This difference is because of the difference in oil.

Indian curries are velvety and have rich complex flavours. Thai curries, on the other hand, are colourful with lighter flavours. Both curries are absolutely delectable in taste.

In Indian cooking, the nature of oil used varies from region to region. Some parts of India use mustard oil whereas others use coconut oil. There are others using rice brand and sunflower oil. Also, a lot of regions use normal and clarified butter. Thai food, on the other hand, uses coconut oil, sunflower oil, and peanut oil.

Types of Leaves used in Cooking

While northern India makes use of Bay Leaves, the southern parts of India make common use of Curry Leaves. In Thai food, Makrut lime leaves and lime grass are used.

Indian food commonly makes use of dry powders comprising of grounded spices. The powders can be from an earlier time as well. However, Thai food abstains from using powders. It makes use of wet paste only. And that too from fresh spices and herbs.

Indian food indulges in Thali culture. A Thali is a large plate. However, in food terms, Thali also implies a lavish meal comprising of starters, main course, appetisers, desserts, and beverages together. Almost every popular cuisine in India has an associated Thali. Thai food, on the other hand, doesn’t have Thali culture.

Even though both Indian and Thai food are varied in colours, flavours, and taste, Indian food is more diverse than Thai food. Reason being, in India, a new food form is cooked in every state and region. And even within those places, the diversity is heartwarming. 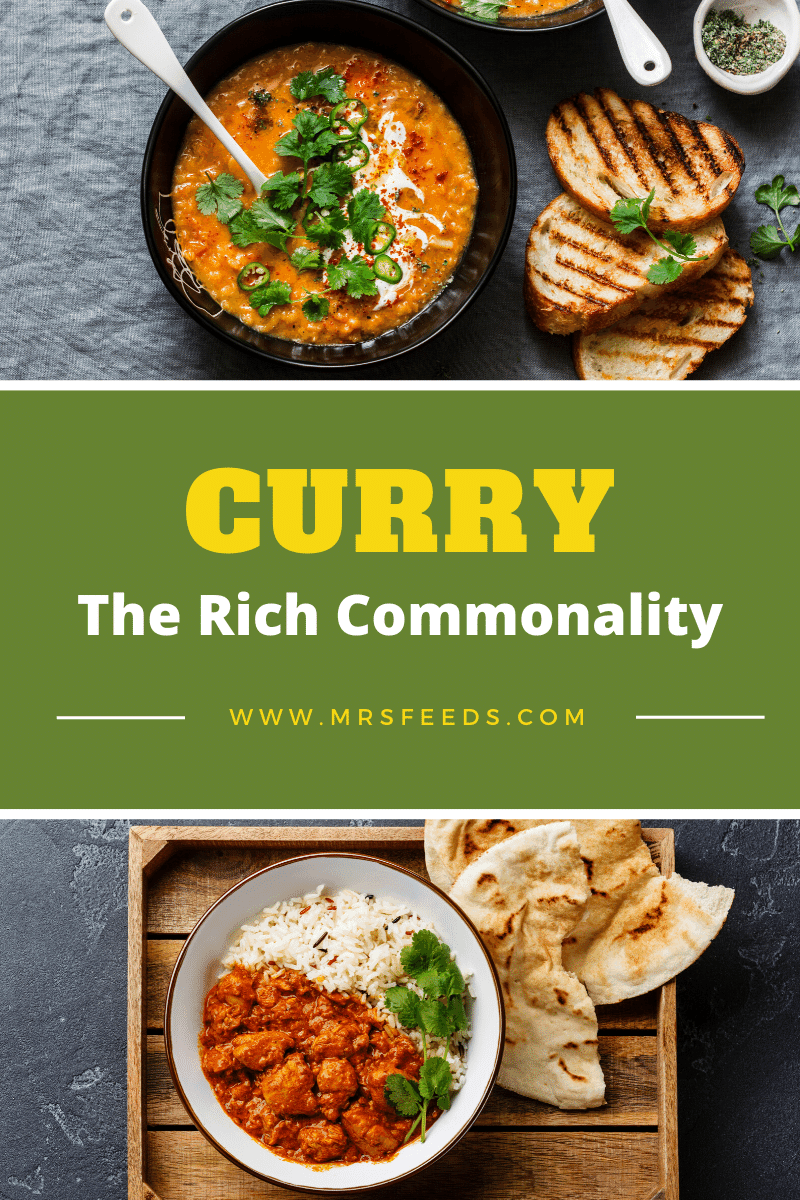 Even though the curries prepared in Thai and Indian cuisine are completely different, both are appetising to even first time tasters.

India – The Land that Gave the World Rich Curries

India is the land of the Curry. In fact, the world was first introduced to the concept of Curry by Brits leaving India. It is believed that the origin of Indian curry dates back to more than 3000 years. Over time, locales across India have come up with their own unique curry ideas.

Meat-based Indian curries are prepared by adding chunks or well-cut pieces of meat to a thick sauce. This sauce is prepared from vegetables using water as a base. Sometimes, coconut milk is also added although that is restricted to a few regions only. Meat-based curries are savoured among the non-vegetarian population.

This traditional Kashmiri Mutton dish is full of aroma and flavour. The gravy is bright red in colour and is served with a bowl of freshly steamed rice.

Chicken Vindaloo is a very popular curry in the coastal state of Goa. The sweet and tangy curry is flavoured with local spices, palm sugar and vinegar.

This is probably the most well known amongst all Indian Curries. With a rich creamy velvety texture, this is one Indian curry that you must absolutely try.

Made from freshly roasted spices and coconut, this aromatic south Indian Chicken gravy is an absolute delight to any food lover. However, if you are someone too sensitive to spices, be a little careful before you take that huge bite.

Laal Maas is basically mutton cooked in a gravy of traditional Indian spices, ginger garlic paste, and yogurt. It is one of the most popular dishes in Rajasthan and is slightly high on the spiciness scale.

Macher Jhol is one of the most beloved and popular dishes in the state of West Bengal. This traditional fish curry is packed with flavours and tastes best when served with rice.

Kodi Kura is the traditional name of the Andhra Chicken Curry. This hot and spicy curry is fairly easy to prepare. It can be made with simple ingredients and tastes absolutely delicious.

The lesser-known Meghalaya Do O Kai is a simple yet delicious delicacy of North East India. The curry is made using minimal oil and lentils, which makes it healthy and unique. 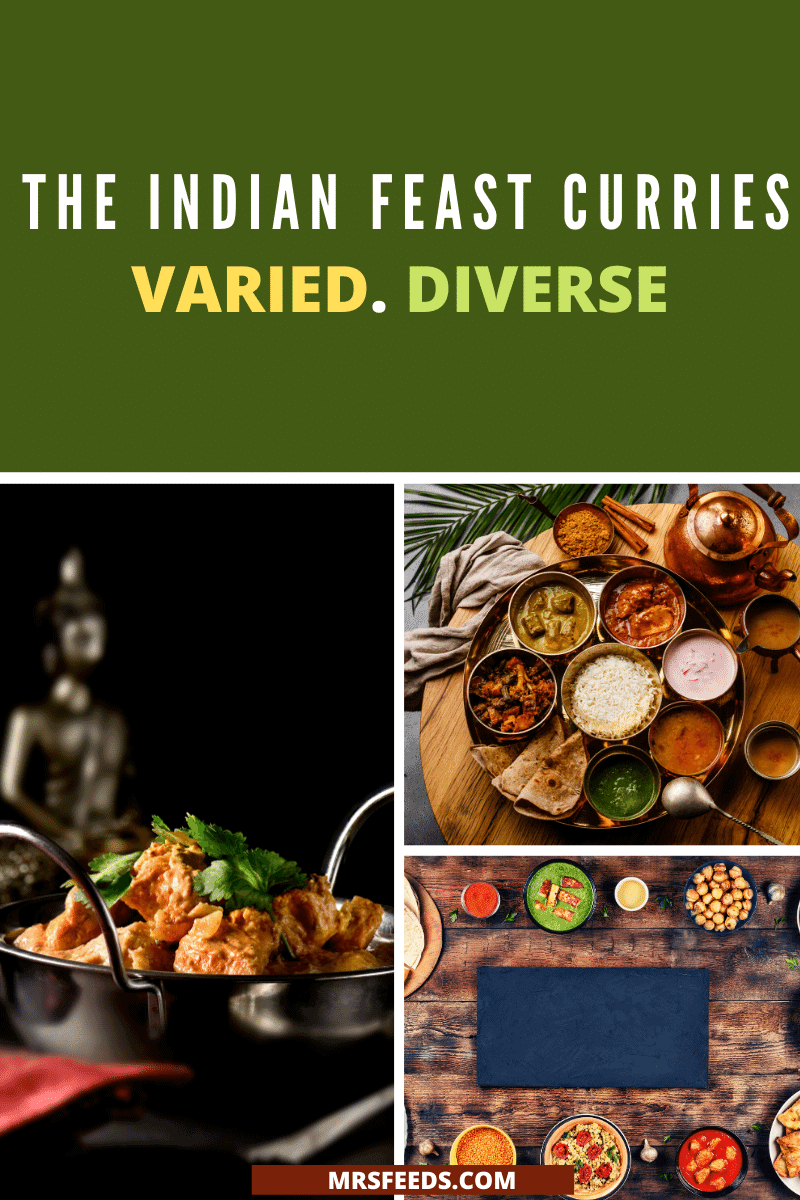 Plant-based Indian curries are prepared by adding an assortment of vegetables or lentils. The base is usually water.  Sometimes, a dairy-based ingredient can also be added as a base. Plant-based curries are widely enjoyed and are delicious. The aroma is good and the colour is appealing.

Paneer Tikka masala is a popular Indian curry. It is made by cooking marinated grilled cottage cheese cubes in a yogurt-based onion-tomato gravy. If you haven’t tried it yet, I would strongly recommend that you try it soon.

Dum Aloo is a very popular Kashmiri dish that is made by using baby potatoes. Filled with subtle flavours, the main ingredients of this dish are Kashmiri red chilli powder and fennel powder.

Navratna Korma is a vegetable curry made using vegetables. The curry has a spicy, nutty,  rich, and creamy texture. It gets its divine richness from the combination of vegetables with nuts and cream.

This bright yellow curry is one of the most popular north Indian dishes. Served with rice, the dish has two main parts-  Deep-fried fritters (pakora) and a yogurt-based curry.

This is yet another yogurt based curry, popular in Westen India. As opposed to the Punjabi kadi, this kadi is slightly sweet to taste. It is generally served with some hot rice.

Sindhi Kadi is a tangy curry made using a variety of vegetables. What I like most about the dish is that it is very easy to cook. The dish tastes best when it is served with hot rice.

If you want to taste some truly authentic Orissa food, try the Aloo Potol Rossa. Made using potatoes and pointed gourds, the gravy is made rich by using coconut. 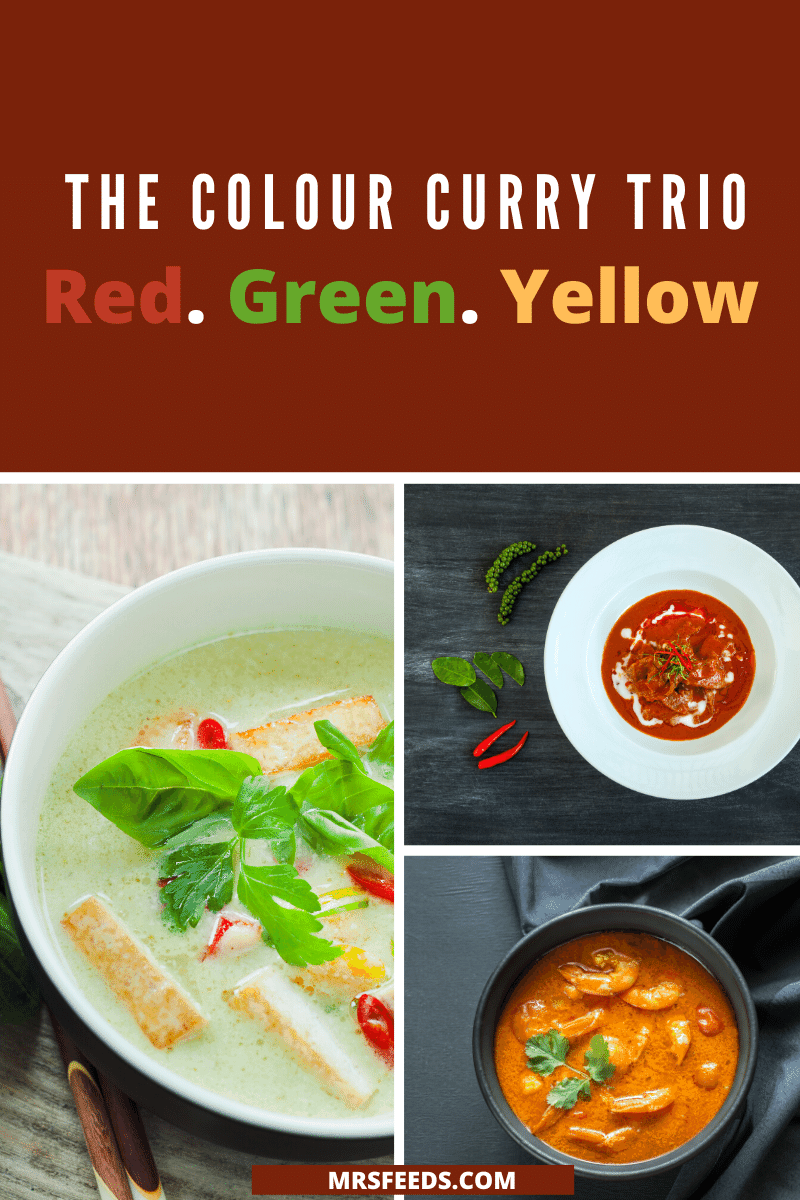 In Thai food – Red, Green, and Yellow Curries are extremely popular. In fact, in recent years people across countries have been adding them to their food bucket list. All these Thai curries are different in two major aspects – colour and the kind of chilly used.

Red Thai Curry comprises of red chillies in the core paste. This could have made this curry extremely spicy. However, that is not the case. A good amount of coconut milk is added to the red chilly paste. And this tones down the curry into a fine mild blend.

Green Thai Curry is the hottest of all curries when it comes to the type of chillies used. Hot green chillies that are freshly bought are ground into a wet paste. The other ingredients include coriander, kaffir lime, and Thai basil. Coconut milk is added here as well. However, despite it, the Thai Green Curry is still spicy.

The Yellow Thai Curry is different from Red and Green ones because it uses turmeric. In fact, it is the turmeric that lends the yellow colour. The rich ingredients of Yellow Thai Curry comprise of fresh herbs and dried spices. This curry is medium mild hot.

I hope my current blog adds more perspective to your existing views on Thai and Indian cuisine. If you feel like, do view the surprisingly alike foods in Mexican and Indian cuisine. They will surprise you and make you stand in awe of the two cuisines.